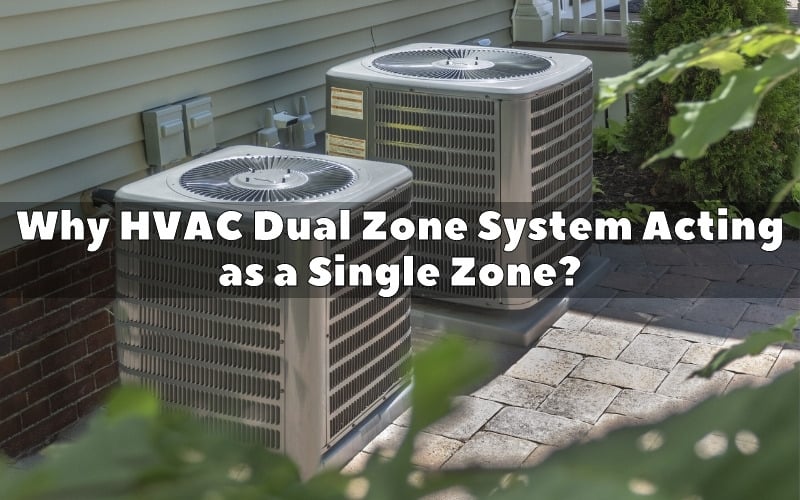 At one point, your dual-zone system might start acting as a single-zone unit. Why would that happen?

A dual-zone system can unexpectedly turn into a single-zone unit, in case one of the thermostats started malfunctioning or the system was not wired correctly. If you have noticed that there are issues with the airflow in one of the zones, then failed dampers might be to blame.

Why HVAC Dual Zone System Acting as a Single Zone?

You might have a dual-zone system acting as a single-zone system, in case only one thermostat will engage at a time. No matter what thermostat you are going to turn on – it is going to control both of the zones.

There are two possible reasons for such a situation:

Why Is My Dual Zone AC Not Working?

The most common issues with dual-zone HVAC systems are malfunctioning thermostats. In fact, a problem with one of these elements can make your dual-zone system act like a single-zone one.

Simply restarting the thermostats might be enough to fix the issue. But sometimes you would have to double-check the settings and the wires.

Other common issues include:

Can You Have 2 Zones with One AC Unit?

Having a single unit for two zones is pretty well-established. If you decide to go with such a configuration, you wouldn’t have to deal with multiple units which is a huge bonus.

It is also possible to have two or more thermostats connected to a single AC unit. This will help you regulate the temperature in the different areas of your house independently.

Can Two Thermostats Control One Zone?

It is possible to install two thermostats in one zone, but the devices might end up ‘confusing’ your HVAC system. This, however, might not happen, if the thermostats were installed correctly (they should be wired up in parallel).

For example, you might want to place one thermostat upstairs and the other one – downstairs without actually dividing the house into zones and adding dampers into your heating and cooling system.

You can set the downstairs thermostat to 75 F and the upstairs one to 77 F. If the HVAC equipment gets triggered by the upper thermostat, the blower will get turned on – and this will even out the temperature throughout the house.

What Is a Dual Zone Thermostat?

There are smart multi-zone thermostats that eliminate the need of having a few devices throughout the house. Dual-zone thermostats work together with external sensors placed in different zones – the thermostat gathers the information from the sensors and independently controls the temperature in all the zones.

The main benefit of such a device is that you wouldn’t have to deal with multiple thermostats. This, in its turn, decreases the chances of any breakdowns.

What Is Single Zone System?

Single-zone systems are installed in the majority of residential buildings. They are able to regulate the temperature across all rooms with the help of a single thermostat.

With such a system, you won’t be able to control the temperature in the different areas of your house separately.

How Does a Dual Zone Air Conditioner Work?

A dual-zone AC divides your house into two zones. The temperature in each zone can be controlled independently and that helps you not only increase the house’s overall comfort level but also use your system a lot more energy-efficiently.

Multi-zone units are a bit more complicated but also a lot more effective than single-zone equipment. If your dual-zone system is acting like a single-zone you won’t be able to take advantage of the benefits that zoning has to offer.

What Is the Difference Between Single Zone and Dual Zone Mini Split?

When it comes to mini splits, the main difference between a single-zone and a dual-zone is that the latter has two indoor units that are connected to a single outdoor unit.

Such mini splits can heat or cool two areas in your home and you would be able to control the temperature for every zone separately.

Even though dual-zone air conditioners are considered to be more energy-efficient, they are not the right fit for everyone. For example, installing such a unit in a small apartment might be pointless.

You’ll be able to benefit from a dual-zone AC, if you live in a home with a couple of large rooms or if you have two stories.

How Many Zones Are There in HVAC?

Some experts suggest that the ideal number of zones for an HVAC system is 2. That is especially true if you have two stories.

However, a zoned system can be customized to your needs. You might want to install a system with 3 or more zones after evaluating how the different areas in your house are used.

Why Does My AC Work Downstairs but Not Upstairs?

If your AC stops working upstairs, you may think that your dual-zone system started acting like a single-zone one. But that might not be true.

The upstairs is always naturally a lot warmer than the downstairs (as hot air rises). The AC on the upper floor might be working correctly, but you won’t be able to feel that in a lot of cases.

To make the most out of your dual-zone AC, set the upstairs temperature two degrees lower.

Read: What Are Zoned HVAC Systems?

Can You Add Zones to an Existing HVAC System?

You can do that, but the conversion includes not only installing new thermostats, dampers, and a zone control panel. You should also figure out where the excess air that is traveling through the HVAC system is going to go (in some cases, you would have to add a bypass duct).

Do I Need 2 Thermostats for 2 Zones?

Typically, dual-zone systems do have two thermostats, but it is possible nowadays to control multiple zones with a single smart thermostat as long as it has been installed correctly.

How Does a House with Two Thermostats Work?

Let’s take a smart thermostat as an example.

Each device in a dual-zone system is going to learn a separate schedule for the area that it controls. Even though the two thermostats will be working with the same HVAC system, the devices will be able to independently control the temperature in their zone as they are responsible for their own set of dampers.

Can a Single Zone Mini Split Cool a Whole House?

A single-zone mini split is a good option for heating or cooling a single room or an open space. It will not be able to effectively cool a large house.

Read: Why Dual Zone AC Not Working In One Zone? Troubleshooting Guide

How Many Heating Zones Should I Have?

The basic system begins with two zones. Homeowners usually choose to keep the living and sleeping areas at different temperatures.