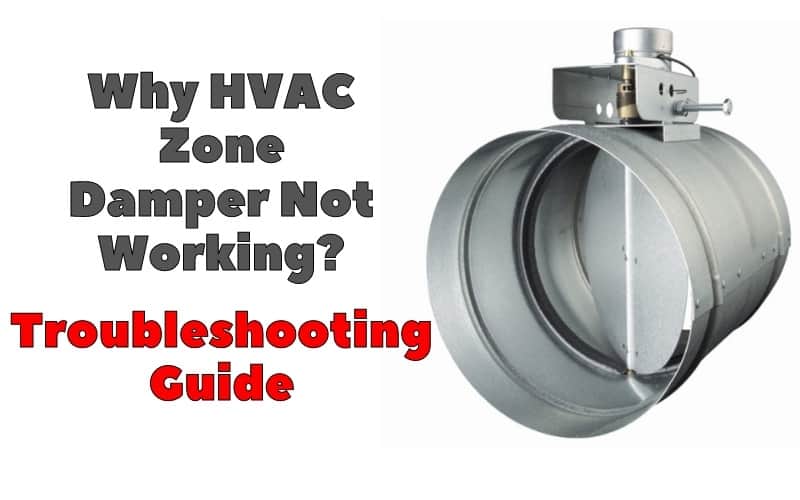 If an HVAC zone damper is not functioning correctly, then you won’t be able to enjoy the benefits that your zoned system has to offer.

A zone damper can stop working, if it gets stuck due to dirt accumulation or if the damper motor or the damper’s spring had gone bad. In automatic dampers, power issues and problems with the wiring might also be to blame.

Why HVAC Zone Damper Not Working?

There are quite a few things that can make your zone dampers stop working.

Read: What Are Zoned HVAC Systems?

How Do You Troubleshoot Zone Dampers?

How Do You Troubleshoot a Honeywell Zone Damper?

How to Adjust Automatic Dampers?

Typically, when the HVAC unit is powered, the motor will rotate the damper until a certain position is reached. Once the power gets removed, a spring pulls the damper into its regular position.

In adjustable automatic dampers, you can change the plate position (detach the spring, loosen the screw, and rotate the plate to the intended position). In such a case, the damper will become either less closed or less open.

Read: Why Dual Zone AC Not Working In One Zone? Troubleshooting Guide

A bypass damper is, basically, a pressure relief valve that is placed between the supply and return ducts. Once the zone dampers start closing, the bypass damper will open up, allowing some air to pass through it.

The main problem with bypass dampers is that when they are open, the strength of the airflow in the system drops. This might cause:

How to Manually Open a Motorized Damper?

Check the motor’s manual. Some of those have a manual release button, and if that’s your case, all you would have to do is push the button and turn the shaft by hand.

It might be extremely challenging even for an experienced DIYer to figure out what’s wrong with a motorized damper. Ideally, you would want to call an expert as such issues usually mean that the damper had gone bad.

How Do I Fix My HVAC Damper?

Locate the damper in the HVAC system, open up the ductwork, and remove the element. The chances are high that you would have to replace the damper with a new one.

How Do You Fix a Stuck Damper?

If the damper is stuck closed, then the problem is with the motor or there is a power issue.

If the damper is stuck open, then you should:

How Do You Fix a Broken Damper?

Changing the damper motor might solve the problem, but in the majority of cases, you would have to replace the whole element.

How Do You Test a Vent Damper?

Turn off your HVAC system and turn the fan setting to ‘on’. Inspect the associated zone for airflow.

If you have minimal airflow or the room feels drafty, then you might have a defective damper.

How Do You Tell If a Zone Damper Is Open or Closed?

If you’re not able to visually inspect the damper and you’re not planning on removing the whole thing from its housing, then you can simply turn on your HVAC system in all the zones. If the air is flowing through all the registers, then the dampers are open.

By the way, some dampers have a colored indicator that shows whether the element is open or closed. A green switch would mean that the damper is open, while a red one – that it’s closed.

How Does a Zone Damper Work?

Manual dampers usually have a lever outside the ducts and air vents, so that you can easily adjust them.

Automatic dampers are considered to be more user-friendly as they don’t require any action on your part. These elements come with small motors that control the shutting and opening of the plates and valve.

How Long Do Zone Dampers Last?

With proper maintenance, zone dampers can last for 15-20 years.

How Do I Know If My Damper Motor Is Bad?

The signs of a faulty damper motor include:

How Much Does Damper Replacement Cost?

The cost of a new motorized damper can range from around $100 to $200 and be prepared to pay for professional installation an additional $150-$250.

Where Are HVAC Dampers Located?

HVAC dampers can be typically found in the main supply trunks. Those are the parts of the ductwork that are blowing cold or warm air (depending on the season).

Some dampers can also be located after the major junctions.

How Many Types of Dampers Are There in HVAC?

Dampers can be classified not only as ‘manual’ and ‘automatic’ – there are also plenty of other types of dampers that can be used in a heating and cooling system.