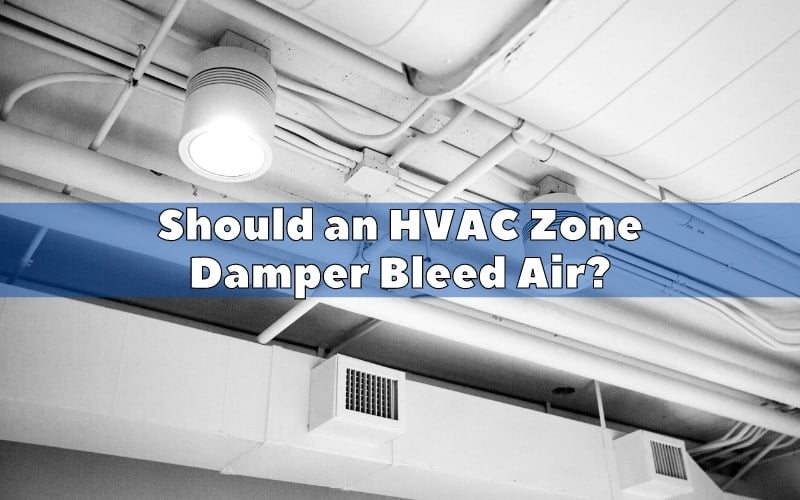 Have you recently noticed that your zone damper is bleeding air? This might be a sign that there’s something wrong with the element.

In a properly installed HVAC system with a bypass duct, the zone dampers should not be bleeding air – when the element is closed, it has to be tightly sealed. Some zoned systems might not have a bypass duct, in such a case, dampers can be adjusted to never fully close.

You might think that leaving the dampers slightly open is a good idea as static pressure won’t be able to build in the HVAC system. However, if your heating and cooling equipment was installed correctly, you wouldn’t have to make the dampers bleed air.

A lot of zoned HVAC systems include a bypass damper that opens whenever there is a need to maintain the appropriate pressure within the system. Such a solution has a few benefits:

If your system does not have a bypass damper, then the dampers in the supply zones can be adjusted to allow air to bleed.

How Do You Tell If an HVAC Damper Is Working?

If your damper is bleeding air and you know that your zoned HVAC system has a bypass duct, then there might be an issue with the damper.

If you turn your HVAC system on in one zone and the other zones do not receive any conditioned air, then your dampers are working perfectly fine.

How Do You Check a Damper?

Usually, all you would have to do to check if the damper is working properly is turn on the HVAC system and take note of the airflow in the registers. There should be a normal amount of airflow and the room should be able to maintain the set temperature.

How Do I Adjust My HVAC Dampers?

Some dampers can be adjusted to bleed 10%, 20%, or more of their air. If your system has 2 zones and every zone is able to handle about 75% of the total CFM, then you can adjust the largest damper to bleed 20% of air (such a configuration might not require a bypass damper).

Manual dampers can be easily adjusted with the help of a lever. Automatic dampers with electric actuators can typically be individually configured from the controller.

How Do You Manually Close a Damper?

You need to have access to the ducts, in order to be able to manually adjust the dampers. Find the lever responsible for the damper that you want to tackle and turn it in the opposite direction of the duct (if the lever is parallel to the duct, then the damper is open).

How Do You Manually Open a Damper?

In case you have automatic dampers that are normally closed and you can’t open the element from the controller, then you might have to disconnect the damper.

Some motors have a manual release button. If you push it, you’ll be able to turn the shaft by hand.

Remember to turn the power to the system off before attempting to manually open or close an automatic damper.

How Do I Know If My Damper Motor Is Bad?

You can always test the actual motor with a multimeter to find out if it’s faulty or not. But there are also ways to tell that the damper had gone bad without accessing the ducts.

Dampers can be either normally open or closed when power is not applied.

When the elements are fully closed, they shouldn’t be bleeding any air at all, unless you choose to slightly open the damper.

What Does a Zone Damper Do?

In a word, a zone damper controls the flow of air in a heating and cooling system. It is an essential part of a zoned HVAC system.

Dampers operate together with thermostats and the zone control panel.

Why Is There Barely Any Air Coming Out of Vents?

If you have a zoned system, the first thing that you need to check is whether the dampers are open or closed (there will be no air coming from the vents, if the damper is closed).

A few other reasons for airflow problems include:

Is It OK to Close HVAC Dampers?

In a zoned HVAC system, the only way to control the temperature in the different parts of the house is by opening or closing the dampers.

If the system has been installed correctly, then you should not worry about closing off some dampers as the excess air is going to travel through the bypass duct. In case the latter was not installed, dampers in the supply ducts should be left slightly open.

What Are the Two Methods of Controlling Zone Dampers?

How Do You Increase Airflow in Air Ducts?

To increase the airflow, you would have to open the damper and the registers. Cleaning the filter and ducts will also help.

When Should You Adjust a Balancing Damper?

As the seasons change, you would want to either open or close the upstairs dampers. In the winter, for example, you can keep the upper floor dampers closed as warm air naturally rises.

How Much Air Should Be Coming Out of Vents?

Measuring the amount of air coming out of the vents can be challenging for a regular homeowner. Moreover, the strength of the airflow will vary from one system to another.

However, you have to make sure that the airflow from the vents is roughly equal throughout the whole house (where the dampers are open, of course).

Is It OK to Close Vents in Unused Rooms?

Closing air vents is not a great idea as this can lead to equipment damage. Closing off some zone dampers, however, is totally acceptable.