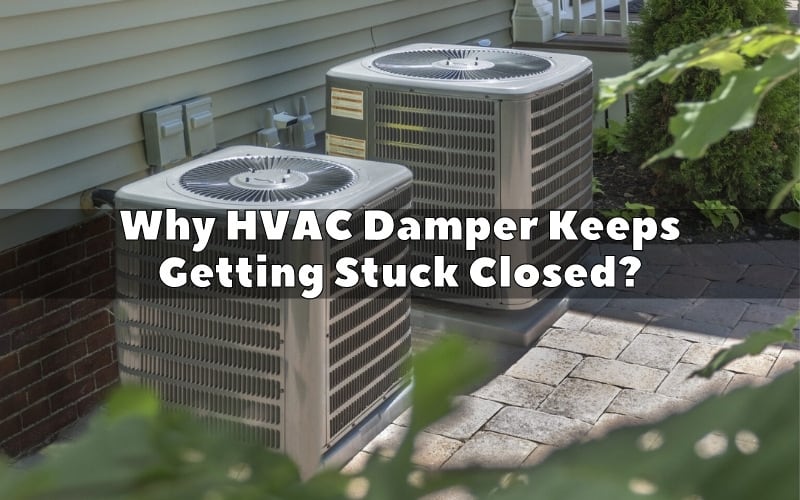 A stuck damper means that one of the zones in your house will not be receiving the right amount of heated or cooled air. And that, of course, needs to be fixed as soon as possible.

HVAC dampers can get stuck if they were installed incorrectly or if the dampers are not the right fit for your particular system. Damaged wires, the accumulation of dirt, a physical obstruction, and a failed damper motor can also result in a stuck damper.

What can get a damper stuck closed will depend on the type of damper you have.

With automatic dampers, damaged wires might also be to blame.

Both manual and automatic dampers can get stuck, if they are dirty or if there is a physical obstruction in the ductwork.

How Do I Know If My Damper Is Stuck Closed?

Before tackling the damper, make sure that the thermostat that is responsible for the affected zone is functioning correctly and that the registers in the area are open. If that did not fix the issue, then it looks like the zone damper is the root cause of the problem.

You can easily find out whether the damper is stuck closed or not by switching on the HVAC system in all the zones. If you don’t feel any air coming from certain registers, then the dampers are closed.

Can Dampers Get Stuck?

Dampers can also get stuck closed if they weren’t fitted correctly. These elements come in various sizes and forms, and your HVAC technician has to make sure that he’s choosing the most suitable type of damper for your system.

Unfortunately, that does not always happen. Poorly fitted dampers will begin to lose their shape over time, and, as a result, the element can start to stick.

How Do I Troubleshoot My HVAC Damper?

In case you have a manual damper that is stuck closed, you should:

If you have an automatic damper, then you can:

Do not apply any sort of lubricant to the motor, unless the user’s manual tells you so. Applying grease to an element that is not designed for it can make the problem worse.

How Do You Force a Damper Open?

The only way to force open a manual damper would be with the help of a lever. If that didn’t help, then you would have to access the damper and try to open it manually.

Forcing an automatic damper open might not be possible unless you disconnect the motor from the shaft and then open it by hand. However, it is not recommended to do that as making a failed damper move might damage the gears or shaft.

How Do You Fix a Closed Damper?

In a lot of cases, failure to open indicates an issue with the motor or the control board in motorized dampers.

You can take a closer look at the connections by removing the assembly. If there are no obvious issues with the connections, you should probably leave the job to a professional who would, most likely, have to replace the damper.

Honeywell dampers are usually spring open and power close. This means that the damper should ‘want’ to naturally open as soon as the 24V is removed.

In case you have to force the element to open, the chances are high that the damper motor had gone bad. The spring might have also become dysfunctional throughout the years.

If you have a new system, then the damper might be stuck closed in case screws holding the component have been installed in the wrong places.

What Does It Mean If the Damper Is Closed?

If the damper in the HVAC system is closed, it will be blocking the air that is traveling to a certain zone. As a result, one or more zones in the house will not be receiving conditioned air which can be beneficial, if you have unused rooms, for example.

How Long Does AC Damper Last?

Dampers usually last for around 20 years. After a couple of decades, they can start to malfunction due to the general wear and tear of their components (which will also contribute to the dampers getting stuck more often).

How Do You Check a Damper?

The simplest way to check whether a damper is stuck or not is to turn on the HVAC system and check the registers. If the airflow is relatively strong, then the damper is open.

How Do You Troubleshoot Damper Actuator?

A malfunctioning actuator is one of the reasons why your damper might not be opening. To troubleshoot the element, you would have to check for proper voltage in the damper or the linkage.

How Do You Increase Airflow in Ductwork?

Opening up the dampers would certainly increase the airflow in the targeted areas. Cleaning the ductwork and air filters and installing fan boosters can help as well.

How Much Are HVAC Dampers?

If your damper is stuck closed and there isn’t a way to open it, then you would have to get a new element.

The cost is going to depend on the type of damper, its size, and its manufacturer, but, on average, you can expect to pay around $350 for a motorized damper.

Where Are HVAC Dampers Located?

Look for the dampers in the main trunk line (it’s usually located in the basement or attic). The dampers can be found right after or before any major junctions.

What Causes an Actuator to Fail?

Why Is One Room Colder Than the Rest of the House?

Usually, it is a matter of air balance. Simply reduce the airflow to the rest of the house and increase the amount of air that the cold room is receiving.

This can be easily done if you have a zoned HVAC system with dampers.

Will Duct Cleaning Improve the Airflow?

Duct cleaning can remove the dust and debris that has accumulated in the system but that will not have a huge effect on the airflow.