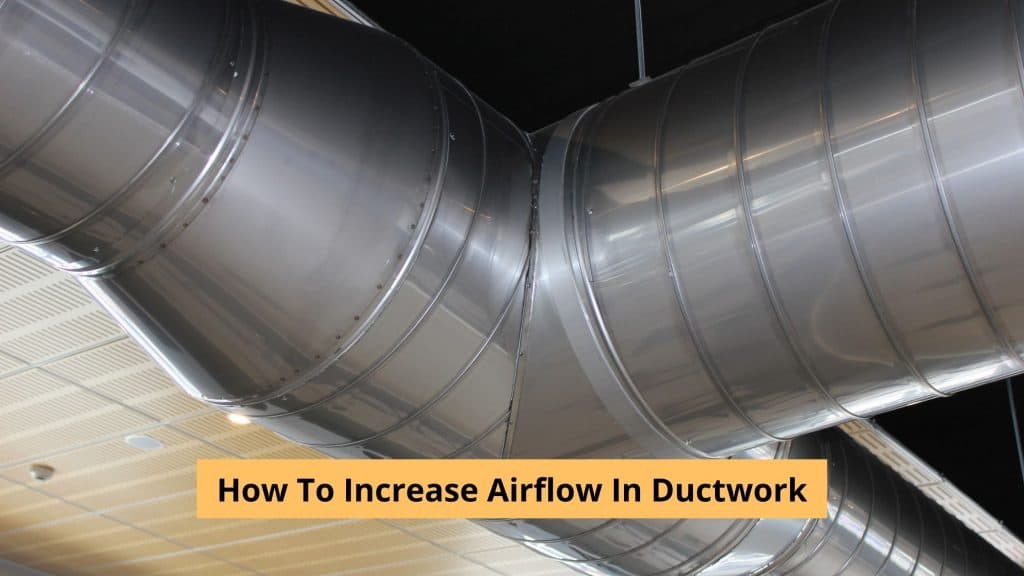 When the airflow in your home seems to be weaker and you have areas that are higher or lower in temperature than the set values this more than likely can point to a problem with your ductwork and its ancillary working components as well as the overall cleanliness of the system.

Increasing airflow in ductwork can be done by cleaning the air filters and ductwork. By adding inline duct booster fans and/or air dampers significantly can improve airflow in weak areas.

Related: How Do I Increase the Airflow in My Furnace?

Steps/Ways Of increasing airflow in ductwork

First, you need to determine the cause of the weak or substandard airflow before spending a large amount of cash buying items that might temporarily seem to have resolved the issue.

But in the long run, might see an increase in energy consumption and impact in other ways like increased noise and vibrations.

The first port of call should be your HVAC system and the attached ductwork.

Check the ductwork for leaks or deterioration due to old age, Seal the leaks with a good quality aluminum duct tape or some mastic sealant.

Clean the HVAC air filters, the filter gets clogged over time with debris and dust build-up, Periodically cleaning these filters will not only assist with the airflow, but it will also improve the overall quality of air allowing for a healthier environment.

Consider cleaning out the ductwork, methodically working your way through the system focusing on bends, areas that have flex ducts and registers and vents.

Before installing an inline duct booster fan, check that your air handling system does not have a built-in fan speed regulator or adjuster, should this be the case, increase the fan speeds and monitor the areas in question for improvement.

If you added to an existing ductwork system over time, go back to the add-ins and check the ductwork sizing and whether the specifications are correct, adding ductwork to an existing system without doing some re-calculation could cause problems with the airflow as the original system was possibly designed to produce a certain volume of air and a set amount of air exchanges per hour.

Airflow regulators or HVAC dampers might also be causing the airflow issues, some might be open more than required or closed.

Getting the balance right is important to improve the airflow, it is also recommended to mark these dampers for each individual area they service for reference. Some HVAC systems have automated dampers that are controlled via the HVAC.

Older HVAC systems would have manually adjustable dampers, this is not always convenient as the adjustment to these dampers might be a bit of an uncomfortable task due to their location. Some owners prefer to remove the dampers completely from the system, but this is not advised.

The low airflow problem might lie with the actual HVAC system itself; this could be because it’s old or due to a lack of routine servicing and maintenance.

Once the inspections and repairs have been completed and the airflow is still not sufficient it is time to look at your installation and where you can improve on the layout by:

Rerouting or re-installing some ductwork bends and in particular flex ducts can cause airflow restrictions.

Pressured air (such as that emitted by your furnace or air handler), will seek the path of least resistance, and will not reach areas that have obstructed pathways

Increasing or decreasing ductwork diameters – changing the diameters in ducting can influence the amount and velocity of air that gets delivered.

It is generally put in a duct run halfway between the blower and the vent servicing the room. It is recommended that it be installed by a qualified person.

A register fan is a similar product. It is a tiny electric fan that is installed in lieu of your wall or floor register. Plug it into a regular outlet and place it in the air register. When the HVAC system is turned on, the fan instantly starts spinning.

An inline booster is more efficient, quieter, and, of course, more costly than a register booster fan.

How to test the airflow in ductwork

There are various methods of testing the airflow in your ductwork, from simple DIY methods to more sophisticated methods using electronic equipment.

For starters, the garbage bag airflow test – so-called since the objective is to measure how long it takes for a garbage bag to fill with air – may help you figure out whether your house has an airflow issue.

The principle is using a garbage bag to close of the supply register with the bag and measuring the amount of time it takes to fill with air.

The Canada Mortgage and Housing Corporation created and improved the garbage bag airflow test, which is a valid test and used since the 1990s, (see here)

According to Home Energy Magazine, a “two-second inflation (75 CFM) is a good strong flow, Anything less than  10 CFM (roughly 15 seconds) is extremely slow and indicates a possible problem. Airflow is measured in CFM (cubic feet per minute of airflow – (cubic feet– per minute)

Alternatively investing in a Velometer or anemometer and an airflow hood for testing purposes will aid in the airflow measurement process.

There are various options with regards to airflow hoods, some rather costly, and then DIY options using cardboard or a lightweight material. The hood is used in conjunction with the meters to determine airflow or the lack thereof.

The technique of airflow measuring is simple to understand. Simply put: the fabric component of the hood collects all the air originating from the register covered by the hood.

At the hood’s base an air velocity and temperature measuring device (a high-end anemometer), is placed which collects the speed and temperature readings and calculates the flow rate based on the register size you specify.

On lower-end devices, you might have to take readings and do the calculations yourself.

Other methods that can be use that is not as specific in results,

but will indicate a low airflow issue, is by placing a piece of paper or tissue over the register to see if it gets affected by the airflow.

The same method can be used in testing the vents or suction side of your system.

How to clean ductwork

Keep your ductwork clean and serviced at least once a year will not only assist with a sustained good airflow, but it will improve the overall *health of the air you breathe in the home as well.

To clean the inside of the vents, use duct-cleaning equipment. This will aid in the removal of dirt and debris that may be blocking your vent.

Equipment such as a vacuum cleaner, some brushes, something like a toilet brush, or a chimney sweeper with stiff bristles and hand tools for the removal and refitting of ductwork.

Unwanted items, such as dead animals or birds, may have been caught on the grill at some time. Before boosting airflow in ductwork, make sure you thoroughly inspect everything.

Remove all large furniture from the room to allow for greater air circulation in the event of a fire.

Request approval for any ductwork additions, alterations, or adjustments. Check that they are well-made and have all the necessary permissions and licenses.

Even if certain sections of the system are not blocked, all ductwork must be checked.

For example, if the filter is dusty but there is still adequate airflow, cleaning the filter will only improve the flow more. Air will continue to circulate once it has passed through the opening and into the room.

Check for increased airflow in ducting using a CO meter or a smoke machine.

These may be used to assess your adhering code and confirm that you are following all the proper procedures. It is helpful when attempting to improve airflow in ductwork since it indicates if your adjustments have an effect on what comes out.

*Indoor air pollution is one of the top five hazards to public health, according to the (EPA), and the millions of trash particles and other allergens that live in your air ducts are not helping.

As with most air handling systems, ductwork plays a pivotal role in the delivery of the air, whether it be hot or cold. It is therefore important to understand your requirements, your system layout, and how the system operates.

Should a new installation or a major repair be too costly, and you just need that little extra airflow, following the before-mentioned processes might just solve your problem and save you the expense.