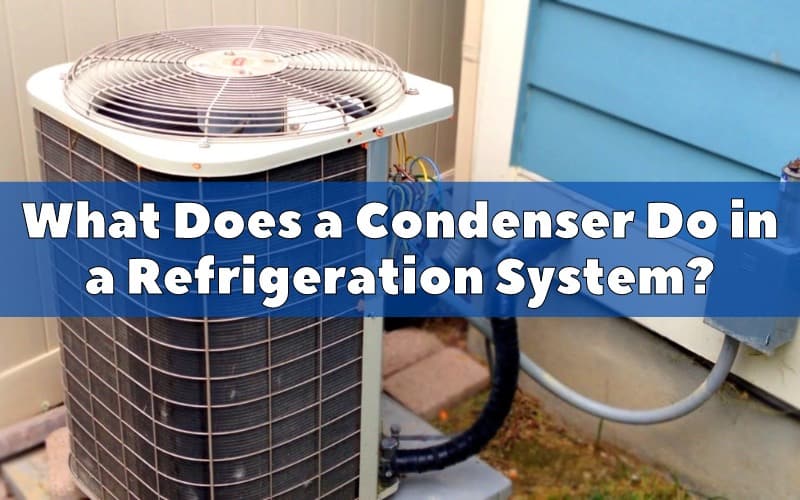 A condenser in a refrigeration system discards the heat absorbed from evaporation, as well as the heat from compressing the warm “subcooled” refrigerant gas. The heated refrigerant becomes pressurized in the compressor and is heated further. The condenser and fan allow the heat to dissipate.

Heat transfer occurs when two surfaces differ in temperature, where the heat flows from the hot surface to the cold surface. A condenser facilitates this process, so this article will analyze its key roles in a refrigeration system. Stick around!

The primary purpose of a condenser is to transfer heat from the high-pressure, warm refrigerant gas from the condenser to the outside environment, where the liquid refrigerant then becomes cooler. When it reaches the expansion valve, the temperature decreases further.

Condenser units have their place, preferably outside the house, where the heat transfer can occur more efficiently. In a refrigerator, the condenser is usually located at the back of the unit, away from visible space.

To accomplish their role, condensers are aided by several parts working in unison:

A condenser is a heat exchanger used in refrigeration systems to allow air to carry heat away from the system. Heat always moves to cold.

Let’s now discuss the individual components of the refrigeration system.

Read: What Are 4 Basic Categories Of HVAC Systems?

The compressor is the heart of the refrigeration cycle and pumps the refrigerant in vapor form to the metering device, which is either the expansion valve or an orifice tube. It plays a central role in transferring heat between hot and cold environments.

Here’s a brief breakdown of the activities that the compressor does:

The compressor runs on a separate motor that compresses the vapor, which converts electrical into mechanical energy, which is what powers the compressor head. The compressor head then squeezes the refrigerant vapor through a smaller opening, where the pressure and temperature rise.

The condenser is one of the two heat exchangers in the refrigeration cycle and plays a key role in the second refrigeration stage. It receives the pressurized refrigerant from the compressor.

The vaporized, high-pressure gas is cooled through a process called condensation. As the refrigerant condenses, it becomes a liquid. Since this fluid came in a compressed state, it now flows under high pressure but at a lower temperature.

In most refrigeration systems, the condenser comprises metal tubes that are surrounded by condenser fins. These metal tubes and fins provide a larger surface area to allow for heat dissipation. The cooling fins also create a large surface area for the warm refrigerant to travel and dissipate heat.

Condensers are also aided by rotating fans that dissipate the heat.

Read: What Are Types Of HVAC Systems In Apartments?

The Expansion Valve, Or Orifice Tube

Without the expansion valve, or orifice tube, your refrigeration system wouldn’t work at all because it receives cold refrigerant from the condenser and decreases the pressure. It does this by providing more room for the refrigerant to expand, and in the process, there’s a rapid drop in temperature, which supercools the refrigerant.

Note: When a fluid expands, its temperature decreases. But when the vapor is compressed, it gains heat.

Differences Between an Expansion Valve and an Orifice Tube

While you might think that an expansion valve and an orifice tube are the same thing, you would probably be wrong. An expansion valve adds more complexity to the refrigeration system, but it provides more precise control of refrigerant flow.

On the other hand, the orifice tube is a simpler and inexpensive way to control refrigerant flow. It can vary the refrigerant flow, but not in the same way as an expansion valve.

But in the event of a compressor failure, foreign particles or dirt can work its way into the orifice tube and plug it, whereas an expansion valve is more resistant to this problem.

Both work well, but the expansion valve is a superior system, even though it’s more expensive. It’s also used in higher-priced systems, such as a walk-in cooler, or larger A/C systems, which are found in office buildings.

Read: Commercial HVAC – Everything You Need To Know About

The evaporator is the final step in the refrigeration cycle and is the second heat exchanger. In this step, the cold refrigerant absorbs the heat from the surrounding environment. The refrigerant flows in another aluminum or copper coil under low pressure. By absorbing heat, some of it changes state into gas while the rest remains semi-liquid.

Next, the warm refrigerant moves into the compressor, and the process begins all over again.

Read: What Is AC Refrigerant? Types Of Refrigerants? And How Its Works?

Below are the three basic kinds of condensers:

Condensers are vital in the operation of a refrigeration system. Their proper function is essential in keeping your room at a comfortable temperature. If you’re having issues with your refrigeration system, a trained professional is exactly the person to diagnose the problem and implement a solution.