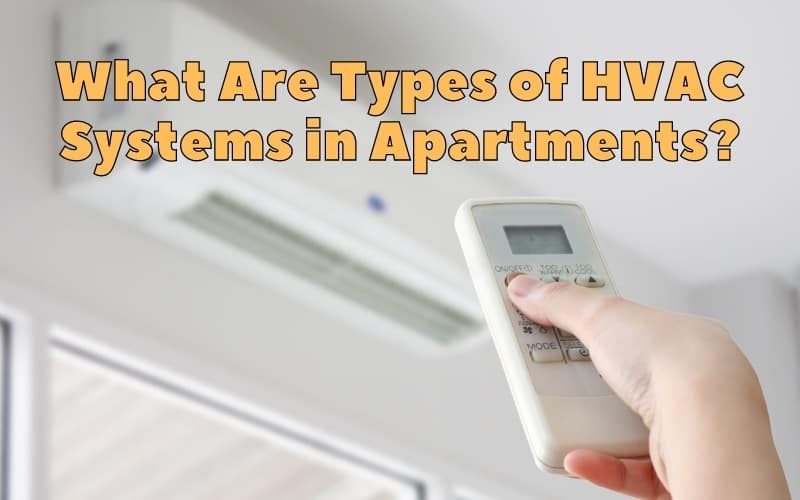 Keeping your apartment cool during summer and nice and toasty during winter might be challenging as you would have to deal with certain regulations and the lack of free space.

A lot of apartments come already equipped with central air conditioning and heating; some decentralized options suitable for an apartment include ductless mini-splits and packaged terminal air-cons. By the way, for high-rise buildings, variable refrigerant flow systems are considered to be the most efficient HVAC systems.

What Are Types of HVAC Systems in Apartments?

These systems are perfect for when extending or installing ductwork is not possible. A mini-split consists of two units (an indoor and an outdoor one), but some models can have up to four indoor air handlers connected to a single outdoor unit.

There is a separate thermostat for each indoor unit which offers more temperature control across the apartments and the installation of a mini-split requires only a tiny hole for the condensate drain and refrigerant tubing.

Your apartment might already have such a system installed. The unit conditions the air in a single central location and then the air gets distributed throughout all the apartments.

Central air is capable of providing conditioned air across all spaces, but the main disadvantage is that you won’t be able to set the apartments to different temperatures.

You might have seen PTACs in hotel rooms or offices. These units are installed directly through walls and they house all the necessary components in a single casing.

The units function independently, so you’ll be able to change the temperature in your apartment. One of the main downsides is that PTACs need to be mounted to a large wall because of their size.

Read: 3 Ways How To Keep Apartment Cool In Summer

Packaged units and individual split systems have been used in high-rise buildings for decades already, but every option had its cons.

Four-pipe water systems and central water-cooled systems have also been systems of choice for the country’s biggest buildings, but the former is too expensive and the latter might develop a water leak.

Variable refrigerant flow systems have been gaining popularity in the US recently. The system includes a condensing unit that feeds numerous small air handlers.

The main benefits of VRF for high-rise buildings include:

There are quite a few different types of HVAC systems that would be suitable for apartment buildings.

Those certainly do include centralized systems (hot water baseboard, two-pipe, and four-pipe systems, geothermal systems…). But if the building already has one, you are pretty much left with no choice.

Decentralized systems definitely do offer a bit more freedom. Baseboard heaters and wall units are relatively cheap to install, while self-contained systems offer the best efficiency out of all decentralized units.

Central air is among the most common type of cooling systems for apartments in the United States. For buildings where central air is not an option, ductless mini-splits and wall units are popular options.

By the way, if you’re on a very tight budget, you can always go for a portable air conditioner.

Read: How To Keep Your Apartment Humid? (7 Tips)

What Is the Most Common Residential HVAC System?

The most common residential HVAC system overall is, perhaps, a mini-split system. When it comes to apartments, most of them have central heating and cooling systems (this is not true for such cities as New York, where a lot of apartment buildings were erected before air conditioning was even a thing).

What to Consider Before Choosing HVAC System for Apartment?

The best HVAC system is the one that suits your needs. That’s why before choosing a new heating and cooling system for your apartment, you would have to consider the following things:

Read: How To Save Heat In An Apartment?

How Do I Tell What HVAC System I Have?

To determine what HVAC system you have, you would have to take note of the placement and the number of the installed units (both indoors and outdoors), the piping configuration, and whether ductwork is present or not.

Is My HVAC Gas or Electric?

Inspect your heating unit. If you see a flame, then it needs gas to operate.

Do bear in mind that the presence of an on and off button and an outlet doesn’t necessarily mean that you have an electric unit – the absolute majority of gas-operated systems need electricity as well.

What Is the Indoor HVAC Unit Called?

The indoor HVAC unit is usually called the ‘air handler’. You might also hear some people calling it the ‘evaporator’ as it’s the piece of equipment that houses the evaporator coil.

What Is a Conventional HVAC System?

It includes two separate pieces of equipment – the air-con works with the help of electricity and has an outdoor and an indoor unit, while the furnace is located inside the building and operates on electricity, propane, or natural gas.

What Is the Difference Between Forced Air and Central Heat?

‘Central heat’ is a term used to describe the systems that generate heat in a central location and then distribute it throughout the house. A boiler system can be called central heating, while forced air can only be a heat pump or a furnace that uses ducts and vents.

How Does a Basic HVAC System Work?

In a lot of cases, both warm and cool air can be pushed through the same ducts and regulated by one controller.

What Is a 2-Stage HVAC System?

Two-stage systems have two levels of operation – a low level that can usually meet the heating and cooling household demands about 80% of the time and a high level that can be used on exceptionally cold or hot days.

How Does HVAC Ventilation Work?

Ventilation is, basically, the process of exchanging or replacing air within a space. In an HVAC system, the ventilation equipment includes the air handler, ducts, blower assembly, and vents.

Does HVAC Include Refrigeration?

HVAC includes air conditioning which is different from refrigeration.

Which Is Better Heat Pump or Central Air?

If you live in an area with moderate temperatures, then a heat pump might be a better option as the system is more energy-efficient.