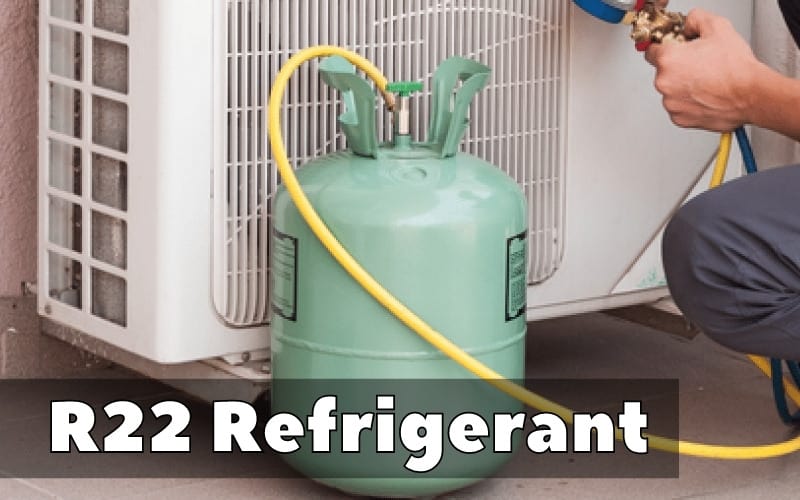 Refrigerants are the substances that make it possible for us to enjoy the cooling capabilities of air conditioners. Unfortunately, not all of these chemicals are harmless.

R22 is a refrigerant that is used in air conditioners manufactured before 2010. At the moment, it’s being phased out as the chemical is harmful to the ozone layer. Because of that, the prices for R22 will continue to rise, so homeowners who still have a system will this refrigerant might want to consider investing in a new one.

Below you will find everything you need to know about the notorious R22.

R22, also known as “Freon”, is a chemical used in HVAC equipment. To be more precise, it is a hydrocarbon refrigerant blend, the primary components of which include propane and butane (those are extremely flammable). In some cases, R22 can also contain other hydrocarbons and even a pine-scented odorant.

When it comes to the physical properties, R22 is a colorless gas that is four times heavier than air (which means that it ‘sinks’ to the floor if leaked).

This chemical possesses a few safety risks that homeowners should not forget about. As we have already mentioned, it’s a flammable substance that can not only burn but also explode, if there is enough R22 concentrated in a single space and the gas comes in contact with a source of ignition.

Freon is also an ozone-depleting refrigerant. And that’s the main reason why the substance is being phased out at the moment (more on this further in the article).

Read: What Is AC Refrigerant? Types Of Refrigerants? And How Its Works?

What Is R22 Refrigerant Used For?

R22 is a refrigerant that has been used for years in central air conditioners, mini-splits, heat pumps, car air-conditioning systems, and other refrigeration equipment. Refrigerants are able to absorb heat and that’s why they’re an essential part of cooling systems.

Air-cons contain the substance in copper coils. The refrigerant ‘starts’ as a low-pressure gas and then transitions into a high-pressure liquid as it absorbs the heat from the indoor space. R22 is then sent to the outside part of the unit, where it releases the heat, cools down, and turns back into a gas.

R22 has been used in the air-conditioning industry since the 1930s. In 2010, the production of new air conditioners that use Freon has been stopped in the United States. This means that if your cooling equipment has been manufactured over 12 years ago, then it might still be using R22.

Do You Charge R22 as a Liquid or Gas?

R22 is a pure refrigerant and it can be added in both liquid and vapor states (the newer R410A, for example, is a mixture of gases which means that it has to be filled as a liquid).

In any case, you would have to add R22 slowly. You might even want to stop every now and then to give the system a chance to normalize. When adding Freon as a liquid, make sure to avoid feeding the compressor with a slug.

The cost of Freon is going to continue to increase as it is no longer being manufactured.

By the way, be prepared to pay not only for the R22 itself but also for the labor. An HVAC technician can charge you $70-$125 per hour and it might take the specialist a few hours to fully refill the air conditioner.

Here are a few approximate numbers:

What Is the Cheapest R22 Replacement?

There are quite a few R22 replacements. If you’re looking for the cheapest alternative, then you might want to consider R410A or R134A.

Read: How Cold Is The Air That Comes Out Of The Air Conditioning Unit?

What Is R22 Refrigerant Being Replaced With?

R22 is a substance that can contribute to the depletion of the ozone layer. That’s the main reason why the US began phasing out Freon in 2010. After 2020, this refrigerant could no longer be used in new air-conditioning systems and the production and import of R22 has been banned.

Thankfully, there are plenty of different alternatives and the absolute majority of them are not only more eco-friendly but are also cheaper. The most popular replacements include R134A, R410A, R407A, R407C, MO99, and RS-44b.

You are allowed to continue using your air-conditioning system, in case it is charged with R22. If you ever need to recharge the unit, it can be done by the Freon that has been recovered from older systems.

Do bear in mind, however, that the prices for R22 will be constantly rising and there is no guarantee that the refrigerant would continue to be available in your region. In fact, nobody knows for sure when the existing supplies are going to run out.

Read: Why Is My Air Conditioner Not Dripping/Draining Water?

Why Is R22 Refrigerant Illegal?

It is not illegal to continue using an old HVAC system that has already been charged with Freon. What is banned is the production and import of this substance.

If you have a cooling system that was manufactured before 2010, then it might still be charged with R22. In such a case, you will be left with two options:

Read: How To Reset Air Conditioner After Power Outage?

Should I Replace R22 AC?

You don’t necessarily need to replace your R22 air conditioner simply because it uses Freon.

But the older the AC gets (and if your system uses R22, then it’s already quite old), the more practical it would be to replace the unit as you might start spending way too much money on various repairs. Moreover, the cooling capacity will eventually decrease.

Even though R410A is advertised as a replacement for R22, you can’t just recharge your old HVAC system with R410A as it operates at a higher pressure.

Before switching to another type of refrigerant, you would have to either retrofit your existing cooling system or invest in a new one.

Only a licensed professional who has undergone the necessary training can recharge your air conditioner. It is a complex and dangerous job that should not be performed by regular homeowners.

A refrigerant is not the kind of substance that you can simply throw in the trash can.

If the chemical has not been contaminated, then the HVAC technician can take the refrigerant back to the wholesaler. Contaminated refrigerant has to be sent to a reclamation facility.

Can You Recover and Reuse R22?

Yes, recovered and reused R22 can be used in AC equipment. In fact, that is the only type of Freon that is being used nowadays, as the production of the substance is banned.

Once the refrigerant has been reclaimed, the oils and debris will be removed from the substance. After that, the R22 can be reused (recycling should be carried out in a special service site).

Up until 2010, R22 was one of the most popular refrigerants used in air-conditioning systems. Nowadays, the production of this substance is banned as it contributes to the depletion of the ozone layer.

If your air-con features R22, you can still continue using it, but it is recommended to consider investing in a newer system.