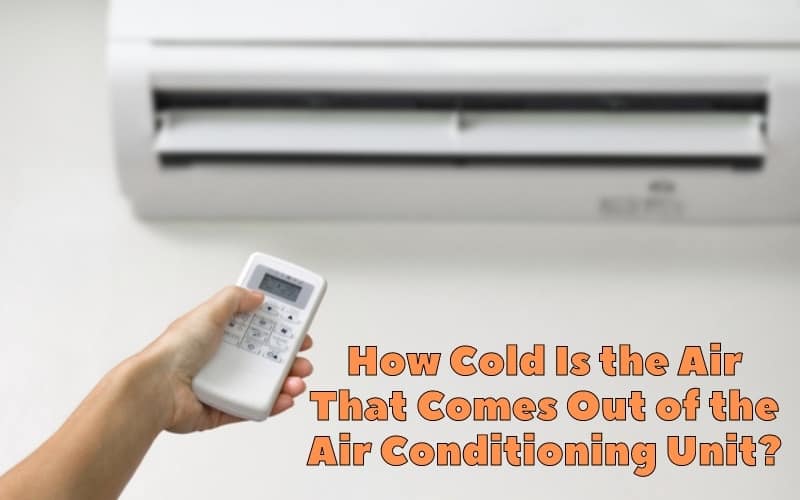 The Air Temperature From an Average Air Conditioning Unit

For example, if the room temperature is 90 degrees, the outlet air of the air conditioning unit will be around 70 degrees. This will gradually decrease as the room gets cooler, and most HVAC systems will maintain a maximum low temperature of 60 degrees.

Some air conditioning units come with a superfan feature which allows for more rapid cooling. In these models, the air from the HVAC vents can be as much as 30 degrees lower than the inlet air temperature. This often depends on the design and size of the HVAC unit and the external temperature.

If the external temperature is higher, you can expect more variation in the air from the HVAC’s inlet vs. its outlet vents. However, as the room cools down, the temperature variation will drop, and the HVAC will maintain a constant temperature.

Despite the advanced cooling technology, there’s no specific temperature at which the air conditioning unit will release cold air. This depends on the air temperature flowing through the inlet vent and the refrigerant system’s capacity. Large air conditioning systems can cool hot air much faster, although they work on the same principles as smaller ones.

When choosing a new air conditioning system for your house, always look at the efficiency and performance rather than the maximum cooling capacity. Even larger air conditioners can only cool down a room to a maximum of around 60 degrees Fahrenheit. The only difference is that they offer much faster cooling than smaller units.

If you’re unsure which type of air conditioning unit is best for your home, you can check this article to decide whether to choose a packaged or split unit HVAC.

Read: Should You Give Your Air Conditioner A Break?

Most people will ignore the air temperature from the air conditioner’s vents as long as the room cools down effectively. However, if the air conditioning unit blasts air that’s too cold or doesn’t have the desired cooling effect, then you’ll have to check the temperature of the vent air.

A damaged pipe can cause the refrigerant to leak, and you’ll have to call an HVAC technician to repair the pipe and refill the refrigerant. This can be costly, so it’s important to monitor your HVAC’s performance and call a professional as soon as you realize that something’s off with the cooling.

Read: Is It Cheaper To Run A Portable Air Conditioner Or Central Air?

Why Your Air Conditioning Unit Is Releasing Warmer Air?

If the air flowing out of your air conditioning unit isn’t cool enough, it’s a sign that something’s wrong with the unit. In most cases, it’s a refrigerant problem, but poor maintenance, wrong thermostat settings, and electrical problems can also cause inefficient cooling.

Let’s look at each of these causes in detail:

If the air coming out of the air conditioning unit isn’t at least 15 degrees cooler than the air going in, your unit may have a refrigerant problem. Sometimes the refrigerant may simply not be enough, but in most cases, it’s a sign of leakage.

Replacing air conditioning refrigerant may be costly, but it’s important to repair leaks as soon as possible. It usually takes several weeks for the coolant to leak out completely, and if you repair the leakage soon enough, you’ll only have to add a little extra refrigerant.

Not regularly maintaining your HVAC unit may result in a dirty filter or evaporator coils. In both cases, dust will restrict the airflow in the unit resulting in poor cooling. Air conditioning units that aren’t properly maintained will also be less efficient.

Sometimes, damage to the electrical wires that connect the outdoor and indoor units of an air conditioner may affect its cooling. If your air conditioning unit starts releasing warm air, check that the outdoor unit is working.

Fortunately, electrical problems aren’t as expensive to fix as compared to other HVAC repairs, but this depends on the nature of the problem.

Read: Why Window Air Conditioner All Lights Flashing And Beeping

The Optimal Temperature To Set an Air Conditioning Unit

The optimal temperature to set your thermostat is 78 degrees in the summer and around 68 degrees in the winter. While most air conditioning units can cool further than this, it’s not recommended from a health and energy-saving perspective.

In fact, setting your thermostat to a comfortable but slightly higher temperature than you would usually set it can result in significantly lower cooling costs. While you may not feel much difference between 68 and 78 degrees, it may result in a 10% reduction in energy costs.

Read: Why Air Conditioner Is Not Heating?