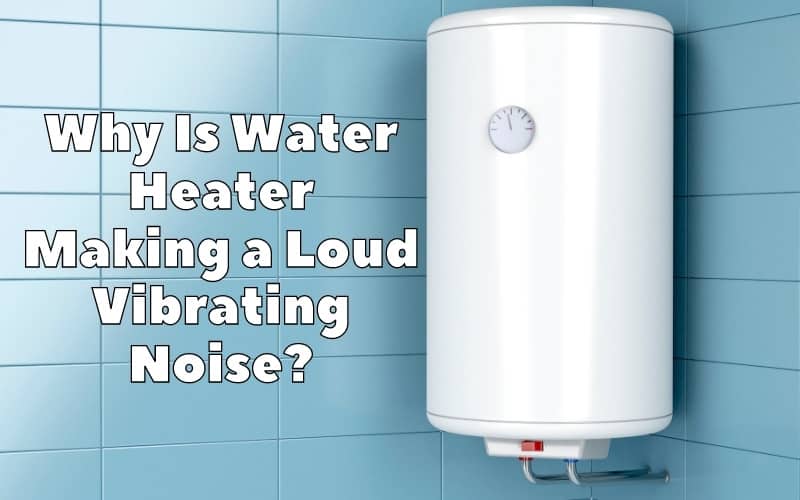 You certainly wouldn’t want to hear your water heater vibrate, knowing that such appliances can actually explode.

In case your gas unit is making a loud vibrating noise, you should check the burner as it looks like its metal plates started rubbing against each other. When it comes to electric water heaters, you should have a look at the upper heating element – it might need tightening.

Does a Water Heater Vibrate?

In general, blowers and fans are the components that can make an appliance vibrate under normal circumstances.

Not all water heaters require a blower. However, high-efficiency gas units can be equipped with an electric blower fan that is typically placed on the top of the unit.

Some gas water heaters require a fan-forced exhaust because the gases can’t be adequately removed by convection alone and they need a little help.

If that’s the kind of unit that you have, then your water heater might be vibrating during operation.

Excessive vibration, however, can mean that the fan is either dirty, or there is something trapped between the blades.

Why Is My Hot Water Heater Vibrating?

The truth is that even water heaters without an electric blower fan might start vibrating at one point. In such a case, the sound would indicate that there is something wrong with the appliance.

Why Is Water Heater Making a Loud Vibrating Noise?

The vibrating sound in gas and electric water heater is going to mean different things.

In a gas water heater, the vibration might be caused by a malfunctioning burner. The burner has metal fins or plates that can get worn out over time; when such elements rub against each other, they will produce a vibrating sound.

Is It Normal for a Water Heater to Rumble?

A rumble is a continuous deep noise that isn’t exactly normal when it comes to hot water heaters.

The source of the rumbling, in the majority of cases, is boiling water that is either trapped in the layer of sediment at the bottom of the water heater’s tank or the actual sediment that is getting moved around the tank by the water.

Rumbling is one of the most common water heater sounds. To avoid it, you should regularly flush the tank and, perhaps, consider installing a water softener.

During normal operation, water heaters shouldn’t be shaking. However, a thick layer of sediment can make the unit shake.

When the water in the tank gets heated, it will naturally start rising to the top. If there is a layer of mineral deposits in the tank, the heated water would push itself through the sediment.

The bubbles of water that are exploding while trying to make their way through the layer are what can cause the water heater to shake (you will also hear a loud, popping noise).

The shaking can have an impact on the water heater’s components. Such an effect would definitely shorten the unit’s lifespan.

How Does a Water Heater Make Noise?

A water heater will never be completely silent, mainly because the actual water will be making sounds as it gets pushed through the system.

However, if you notice unusual noises or the sounds become too loud, then it looks like there is something abnormal happening during the unit’s operation process.

Obstructions in the system, loose components, changes in water pressure, excess sediment build-up – all these things can end up making sounds.

Why Is My Hot Water Heater Making a Loud Humming Noise?

The great news is that it’s usually relatively easy to fix a humming water heater as such a sound indicates that one of the components within the unit is loose.

Simply tightening the element would help you get rid of the problem. If you have an electric water heater, the upper heating element is usually the part that becomes loose more frequently, so you might want to start by checking this element.

Tank-tank water heaters end up working day and night to maintain the temperature of the water. So, the unit’s operational process doesn’t really change during the night.

The thing that is different, however, is the overall noise level in the house.

During the night, when everyone goes to bed, it becomes a lot quieter in the household. And that is exactly why you might notice the noises that your water heater is making only at night (even though the sounds already were there during the day).

Read: Is Furnace And Water Heater The Same?

How Do I Stop My Water Heater from Making Noise?

The first thing that you should do is confirm that your unit is working properly. The water heater might be noisy because there is something wrong – in such a case, an experienced plumber would be able to fix the problem.

If your water heater is in great condition but, for some reason, you can’t stand the noise that it makes, then these are the things that you can do.

The majority of water heaters already have a layer of insulation fitted to the outside. However, if your unit doesn’t have one, then you can add insulation yourself.

You should be careful though, as fiberglass insulation and vinyl tape might restrict the airflow.

If the water heater is located in a small room, you can try soundproofing the whole space. If the room is too big, then you can install a wooden frame around the unit and line it with soundproofing materials (remember about the airflow though).

You can also soundproof only the ceiling if the water heater is located in the basement.

Warning! Soundproofing the water heater and the room might seem like a great idea, but it would make it more challenging for you to pay attention to the sounds that the unit is making.

Make sure the appliance goes through regular maintenance

A ‘healthy’ water heater won’t be making too much noise. The unit has to be flushed and checked by a professional at least once a year.

How Often Do Water Heaters Burst?

Unfortunately, at one point, a water heater can burst. In such a case, you would not only have to start looking for a new unit, but also have to deal with all the damage that the explosion has caused.

The worst part is that burst tanks don’t always automatically shut off.

The most common reason why a water heater can burst is because of the formation of corrosion within the tank.

In the majority of cases, the age of the unit is to blame. Around 40% of water heaters will burst by the time they reach their 9-year mark.

What Are the Signs of a Hot Water Heater Going Bad?

A loud vibrating noise might actually be an indication that your water heater is about to go bad as such a sound can mean that there is either an issue with the burner or with the heating element.

How Long Do Water Heaters Last?

The lifespan of your unit will mainly depend on how well you are able to maintain the appliance. So regularly getting the water heater checked might actually save you a small fortune in the long run.

How Often Do Water Heaters Need to Be Replaced?

You might want to get a new water heater about every 10 years. However, you may have to consider buying a new unit a bit sooner, in case you are having too many problems with the existing water heater.

Remember that it is much better to replace the unit before it actually fails.

Some tankless models can last for 20+ years, but holding on to the unit for so long may not be the best decision.

Updated water heaters are much more energy-efficient, so you might want to consider investing in one before the previous unit bursts.