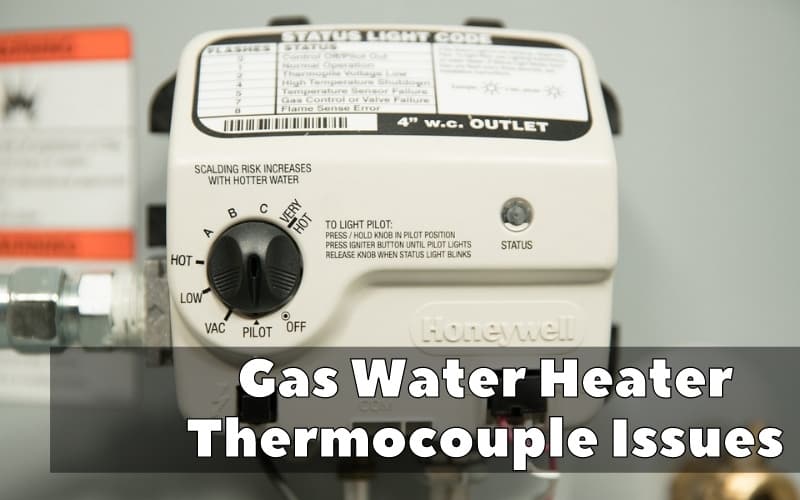 A thermocouple is a sensor that is used to measure temperature and detect whether or not the water heater’s pilot light is lit. You certainly wouldn’t want this element to fail as it’s an important safety device.

The most common gas water heater thermocouple issues include a pilot light that keeps going out, a burner that won’t light, and the absence of hot water. This might happen, in case the thermocouple is dirty, faulty, worn down, or improperly positioned.

How Do You Know If You Have a Bad Thermocouple?

To find out for sure whether your gas water heater has a bad thermocouple or another problem, you can perform this test:

Bear in mind that some thermocouples do not have dual wire leads. You are going to need special equipment to test those, that’s why calling a professional might be the best idea.

What Happens If You Have a Bad Thermocouple?

If the thermocouple had worn out, then:

An obstruction in the pilot tube and some other issues might lead to such problems as well. However, if the flame goes out once you release the gas control knob (after holding it for 20-30 seconds), then the chances are high that there’s an issue with the thermocouple.

Read: What Is Water Heater Heat Pump? Everything You Need To Know

What Causes a Thermocouple to Fail?

The thermocouple or the ‘flame sensor’ is a safety device that will shut the gas off, if the pilot light goes out. The element is, basically, a metal rod that should be touching the flame when the water heater is operating.

The main things that can cause the thermocouple to fail include:

Read: Does HVAC Include Water Heater?

Will a Pilot Light Stay Lit with a Bad Thermocouple?

How Do You Fix a Thermocouple?

At times, the simplest thing that you can do is replace the thermocouple. It is a relatively easy job that won’t take you too long.

Moreover, thermocouples are not expensive, so getting a new one won’t make a huge hole in your wallet.

If you have confirmed that the thermocouple has not gone bad, but it is still failing to sense the flame, then you can try cleaning the element or adjusting it.

To adjust a bent thermocouple or move it closer to the flame, you should:

Hint: if the pilot flame is too small and is not able to reach the thermocouple, then try turning the pilot adjustment screw counterclockwise. Also, do make sure that there are no obstructions in the pilot tube.

Can You Clean a Thermocouple?

You can certainly clean a thermocouple as this element will get covered in soot and/or dirt over time.

Cleaning the thermocouple every 6 months or so should be enough.

How to Clean Thermocouple on Water Heater?

Hint: before removing any part of the unit, take a picture of how it was assembled.

How Long Should a Water Heater Thermocouple Last?

If properly installed and maintained, thermocouples can last for up to 10 years.

Gas water heaters, in their turn, have a general lifespan between 8 and 12 years, so if you manage to take great care of your unit, you might not have to replace the thermocouple at all.

Make sure to disconnect all the connections to the gas control valve before you begin (disconnect the thermocouple, the burner supply tube, and the pilot supply tube).

Turn the gas control valve to ‘off’ and close the shutoff valve (on the gas supply pipe).

If the water heater has been running, give the unit around 30 minutes to cool down.

If you have an electronic ignition water heater or a standing-pilot unit:

For an electronic ignition unit, you would have to remove and then reinstall the igniter.

For a standing-pilot water heater, you would have to relight the pilot before setting the gas control valve back to ‘on’.

How Much Is a Thermocouple for a Gas Water Heater?

Thermocouple replacement is one of the most common repairs needed for gas water heaters. It will cost you anywhere between $100 and $325 to have the element replaced by a professional.

If you have the necessary skills and equipment, you might want to replace the thermocouple on your own. In such a case, you would have to pay only for the actual part – that’s between $5 and $20.

Generally, thermocouples are interchangeable as the majority of them have standard connectors. Universal components are compatible with clamp-type, push-in, and screw-in pilot burners.

By the way, even the length of the thermocouple doesn’t really matter as it has no effect on the element’s accuracy.

However, do bear in mind that older water heaters with standing pilot lights utilize a thermocouple, while the more modern units with electronic ignition have a flame sensor.

The devices are pretty much the same, but you should still take the model of your water heater into consideration.

Read: How Many Amps Does Water Heater Use?

Can You Bypass a Thermocouple on a Water Heater?

You should not bypass a thermocouple as it is an extremely important safety device.

Without this element, your water heater might continue supplying the unit with gas even if the pilot light is out. In such a case, the gas is going to escape into your house – and that is a very serious safety hazard.

If you need to urgently use the water heater, the chances are high that you’re not going to be next to the unit all the time to keep an eye on the pilot light. So, in the worst-case scenario, gas might end up accumulating close to your floor.

In any case, cleaning the thermocouple or getting a new one and replacing the faulty element would require less effort (and, of course, is a much safer option).