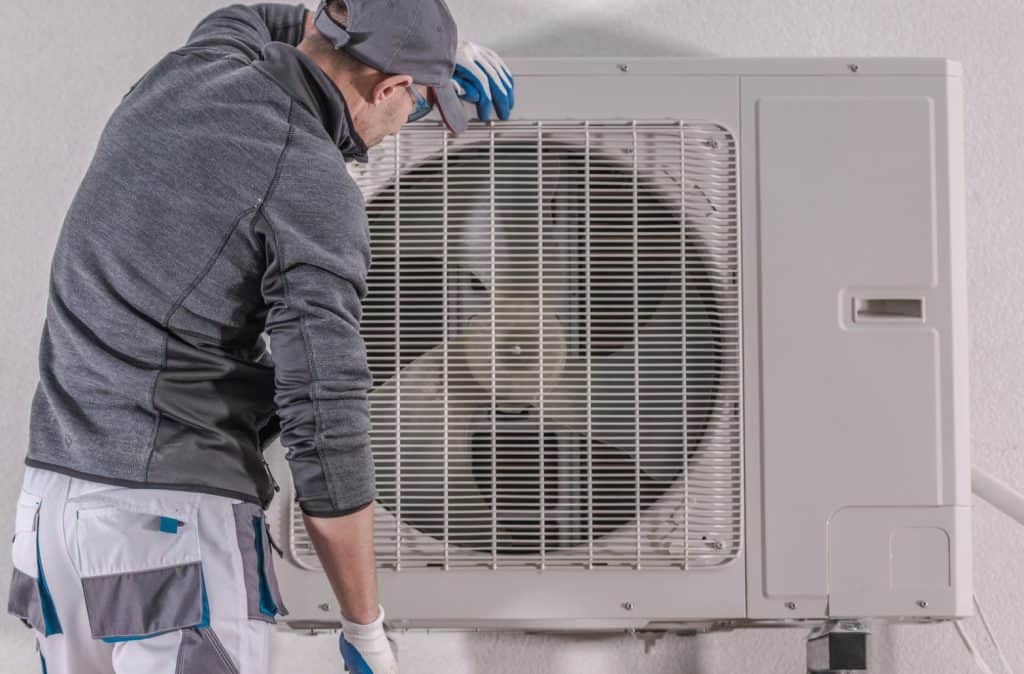 Heat pumps are a common piece of equipment in any home and are often used as an energy-efficient alternative to air conditioning and furnace systems.

Although heat pumps are usually highly efficient, they are prone to technical difficulties like any other piece of equipment, particularly in the spring when temperatures frequently fluctuate.

A common issue during this time is the heat pump heating properly but not cooling.

If you have discovered your heat pump heats your home properly but does not cool, there are a series of simple troubleshoots you can try. Some of the most common causes of this issue include loss of refrigerant, a faulty thermostat, and broken or dirty components like the filter, coils, and reversing valve.

Read on to learn more about the most common causes for a heat pump not cooling properly and potentially how to fix each issue.

Common Causes for a Heat Pump Heating but Not Cooling

Before you go running off to contact your preferred professional repair company to fix your heat pump, test to see if some of these common causes are why your system isn’t cooling properly.

The average heat pump repair by professionals costs about $372, mostly due to companies charging a minimal trip fee on top of hourly rates.

However, you could potentially spare yourself the extra expense since many of these issues can be easily fixed without professional assistance.

More often than not, if you find that your heat pump is creating lukewarm rather than cool air, then there is probably a leak in the system, and it’s losing too much refrigerant.

Even if your heat pump is in cooling mode, it won’t be able to effectively create and disperse cool air without sufficient amounts of refrigerant.

There is a line within your heat pump strictly for refrigerant so that this product can capture heat within your home through the indoor coil that is then carried outside to the radiator-style outdoor coil.

However, if there isn’t enough refrigerant in the system, it can’t reach the outdoor coil to be further dispersed by the heat pump’s fan.

The result is lukewarm or cool air flowing through your home rather than the desired cold air to reduce the temperature more effectively.

Although there are many issues on this list that you can repair yourself, this, sadly, is not one of them.

It is inadvisable to repair a refrigerant leak in your own system without professional training and the proper licensing.

Even if you were to somehow mend the system yourself, you have no way of knowing if your system is properly recharged with refrigerant without special equipment.

Ultimately, the repair process is much faster and safer with an HVAC technician present.

Repairing a refrigerant leak in a heat pump can be a pricy endeavor ranging from less than $250 to over $2,000 depending on what caused the leak and where it is.

Depending on the damage, it might be more cost-effective to replace the system or a section of the system than to repair the leak.

Another common cause for your heat pump isn’t producing cold air would be dirty components within the system inhibiting proper refrigerant or airflow.

The two most common components that get dirty and cause this issue within a heating system are the air filter and the coils.

A dirty air filter can actually cause a series of issues within your heat pump system in addition to improper cooling, such as:

Luckily, replacing a dirty air filter is one of the easiest and cheapest solutions to this problem. You can acquire a singular filter from anywhere between $25-$100, depending on your system.

If you don’t have a spare filter or can’t acquire one in a timely manner, you could remove some of the debris yourself with a soft brush and then gently shaking and tapping the filter until it is moderately clean.

Although this will remove the most significant clumps of debris, it is still best to replace the entire filter as soon as possible.

If your dirty filter is causing health issues within the home, it is best to remove it from the system altogether.

Your heat pump can function without a filter, but only for 24-48 hours, so plan accordingly if you are going to remove it.

. The cost can range from $50 to $180, which might not be cheaper than a singular filter, but it will be cheaper than repairing more significant components, or worse, the whole system.

The other component most likely to be covered in dirt and debris is the heat pump’s coils.

There are two major coils within a heat pump, the indoor coil and the outdoor coil, and it is essential to the system’s functionality that both are as clean as possible.

Because of their design, it is quite easy for debris and other contaminants to cling onto coils. Luckily, this is another issue that can be easily fixed.

In the case of outdoor coils, you can clean off any debris with the average hose and a light-bristled brush.

You don’t want to use anything too abrasive on these coils, like a pressure washer or stiff-bristled brush, because they could easily damage the coil’s exterior and cause other system problems.

In the case of indoor coils, you can still clean these yourself, but it will be a trickier process since the coils aren’t as easily accessible indoors as outdoors.

Typically, you can spray the coils with a no-rinse evaporator coil cleaner and gently remove stubborn debris with a light paintbrush.

If this doesn’t work or you’re having trouble accessing the coils, an HVAC technician can make short work of this process.

Again, it is often beneficial to invest in a maintenance service to prevent these issues from occurring.

Realistically, anything within your heat pump could be damaged or break, but typically when the issue is insufficiently cooled air, the most common causes are either the thermostat or a system valve.

If your system has a new thermostat, then the issue probably lies elsewhere. However, if you’re certain that your heat pump’s thermostat is an older model, it’s possible it has broken down or doesn’t function as well as it used to.

Using an old thermostat for your heat pump could mean that the system isn’t communicating properly because the thermostat is registering the wrong temperature, or there could even be a connection issue with the reversing valve.

Even if your old thermostat isn’t the root cause of the problem, or you’re uncertain on this point, it’s probably worthwhile to just replace it.

Most new thermostats can be acquired for as little as $15, although the national average is closer to $173 due to the increased popularity of smart thermostats.

Overall, this is another quick fix you could do yourself. If you aren’t interested in replacing your thermostat for financial purposes or because it isn’t that old, you could fix the problem by recalibrating it.

In addition to the thermostat, the other most commonly damaged components within a heat pump are the valves. Each system has multiple valves necessarily for functionality, including:

Each valve has its own job in directing the flow of refrigerant and air throughout the system for heating and cooling.

If the valve is damaged, then the system might be locked in one mode, or the air/refrigerant is being misdirected within the heat pump.

More often than not, if a valve within the system is broken, it’s probably the reversing valve.

The reversing valve ensures that the refrigerant within the system flows in the right direction after it leaves the compressor.

The direction that the refrigerant is flowing will indicate what mode the system is in (cooling or heating). If this valve is damaged or stuck, then the system can’t switch between modes.

Replacing or repairing a valve often requires some interaction with refrigerant, which means you’ll need to call in an expert for this job. This service can be quite pricy, particularly if you’re dealing with a damaged reversing valve.

Heat pumps aren’t exactly cheap pieces of equipment, but you don’t always have to spend extra cash to fix them when discovering your system isn’t creating cool air.

Be sure to check some of these more common causes, like dirty air filters, before contacting a professional. However, if you discover that resolving the issues involves interacting with the refrigerant within your heat pump, then leave it to a licensed professional.