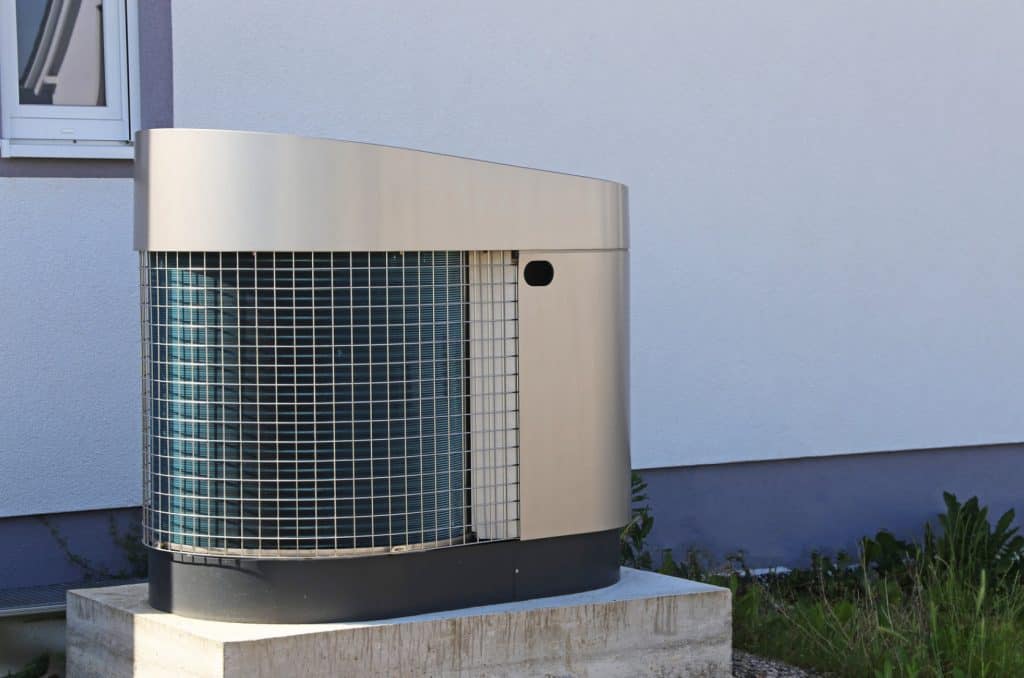 When thinking about how to cool your home in hot weather, it is essential to keep both energy and cost efficiency in mind when choosing a cooling method.

One common option is to use heat pumps, rather than traditional air conditioning units, as a method for cooling an indoor space.

Heat pumps are highly energy-efficient and cost-effective when used in place of air conditioners in hot weather. However, heat pumps are much less efficient when used in colder temperatures, making them best to use in warmer climates.

In this article, we will discuss how efficient it is to use heat pumps as air conditioners. Keep reading to learn more about how heat pumps work and how different climates affect their level of effectiveness.

The Efficiency of Heat Pumps as Air Conditioners

Heat pumps are known for being much more environmentally friendly than traditional air conditioning units and being much easier on the wallet.

The U.S. Department of Energy (DOE) reports that heat pumps can “provide equivalent space conditioning” as a traditional air conditioning unit but at approximately a fourth of the cost.

“For climates with moderate heating and cooling needs, heat pumps offer an energy-efficient alternative to furnaces and air conditioners. Like your refrigerator, heat pumps use electricity to move heat from a cool space to a warm space, making the cool space cooler and the warm space warmer.”

When it comes to how much energy can be saved by using a heat pump to cool a home or other indoor space, most heat pumps are considered to be as energy-efficient as high-end air conditioning units.

The benefit of choosing a heat pump over an AC unit is that it can also be used to heat an indoor space in colder temperatures and is considered much more efficient than alternatives such as furnaces.

Thus, using a heat pump instead of an AC unit means that a person may be able to cut back on heating costs as well.

How a Heat Pump Works

As covered, heat pumps utilize electricity to move heat from one place to another. As such, during hotter weather periods, a heat pump can transfer the heat from indoors to the outside and effectively cool down the indoor space.

According to Carrier, heat pumps can alter the flow of refrigerant through the use of a reversing valve. This allows for the heat pump to be switched from heating to cooling.

An evaporator coil transfers heat from the air to the refrigerant, where it is eventually circulated to a condenser coil. A fan within the heat pump system is then used to blow air across the condenser coil, which releases the heat in a given direction (inside or outside).

This means that the electricity that a heat pump uses to operate is only used to power the machinery, not generate cold or hot air. As such, a heat pump can drastically improve a household’s energy usage.

Moreover, heat pumps tend to maintain a much more consistent indoor temperature compared to air conditioners that may cycle on and off repeatedly, leading to a constantly fluctuating room temperature.

If humidity is an issue, heat pumps can also help to reduce humidity just as effectively as air conditioners, making them equals in terms of capabilities.

When choosing a heat pump, three main types can be selected: air source, geothermal, and absorption.

Each of these types of heat pumps comes with its advantages, and understanding which one best fits a specific home’s needs is essential for getting the most out of the product chosen.

The primary difference between the three types of heat pumps is where they draw air from. That factor alone is accountable for a significant difference in upfront costs.

Additionally, which source you choose may also depend a great deal on the climate in which you call home. For a heat pump to function properly, it must have access to air through one of three sources: air, water, or ground.

Air source heat pumps are one of the most common types to be used in place of air conditioning and heating systems. These heat pumps take in heat directly from the air surrounding them, hence the name “air source.”

Air source heat pumps that are designed specifically for high efficiency are also said to have a more significant impact on reducing and managing humidity indoors compared to traditional air conditioners.

This allows for indoor environments to be more comfortable overall, thanks to the better maintenance of both temperature and humidity.

Geothermal heat pumps are a relatively new commodity that allows for heat pumps to be used in colder climates, as well as providing better year-round energy efficiency as compared to air-source heat pumps.

This is because temperatures at approximately 10 feet below the ground’s surface stay consistently between 50 – 60 degrees Fahrenheit.

The earth’s constant underground temperature means that geothermal heat pumps can be used even in colder regions.

According to the U.S. Energy Information Administration, these kinds of pumps transfer the heat from in or out of the ground, rather than directly from the air like air-source pumps.

While geothermal heat pumps are generally considered more energy efficient and thereby more cost-effective, the upfront costs tend to be more expensive due to a more intensive installation process compared to that of air-source heat pumps; instead of a vent going through the outer wall, now a hole needs to be drilled underground as well.

However, if environmental impact is a high priority issue for a homeowner, geothermal heat pumps are the way to go. According to the U.S. Environmental Protection Agency (EPA), geothermal energy is a renewable resource.

Absorption heat pumps are an additional type of air-source heat pump. However, rather than being powered by electricity, these heat pumps derive their power from an alternative external source, such as natural gas or propane.

Absorption heat pumps are rarely used and generally only seen in homes or other indoor spaces that do not have electricity.

However, absorption pumps can use any heat source and function as part of “zoned systems” – a system in which different rooms or parts of an indoor space can be set at different temperatures.

One of the main benefits of using absorption heat pumps is that they can operate using a wide range of heat sources so long as the heat source can reach a hot enough temperature.

These heat pumps certainly cut back on energy and electricity costs but may come with their alternative costs to have access to another heat source, such as propane.

The Impact of Climate on the Effectiveness of Heat Pump Cooling

For many years, the air source heat pump was the only real heat pump product that could be purchased.

For homeowners who live in overall warmer climates with mild winters, these devices were more than sufficient to serve as both cooling and heating providers.

Comparatively, for those living in areas that reach temperatures below freezing during the winter, air-source heat pumps were not as advantageous.

While in the summer months, an air-source heat pump may be effective at cooling, once winter arrives, there is not as much heat available in the air to warm the indoor space.

Because it takes immense amounts of energy to extract and move heat from a cold space, standard air-source heat pumps are not very effective in regions where temperatures drop to freezing or below.

This means that heat pumps used as air conditioners were not seen too often in colder regions.

However, geothermal heat pumps have provided a potential solution to this problem that can allow for those living in colder climates to take advantage of a heat pump’s dual heating and cooling use.

What to Look for When Buying a Heat Pump

When purchasing a heat pump to use for cooling, there are a few key features to look out for:

Heat pumps work rather efficiently as alternatives to other cooling devices, such as air conditioners, and have the potential to cut back on a household’s overall energy costs.

While at one time, heat pumps may have only been truly efficient in warmer climates, the invention of geothermal heat pumps has allowed for the devices to become more useful in colder climates as well.