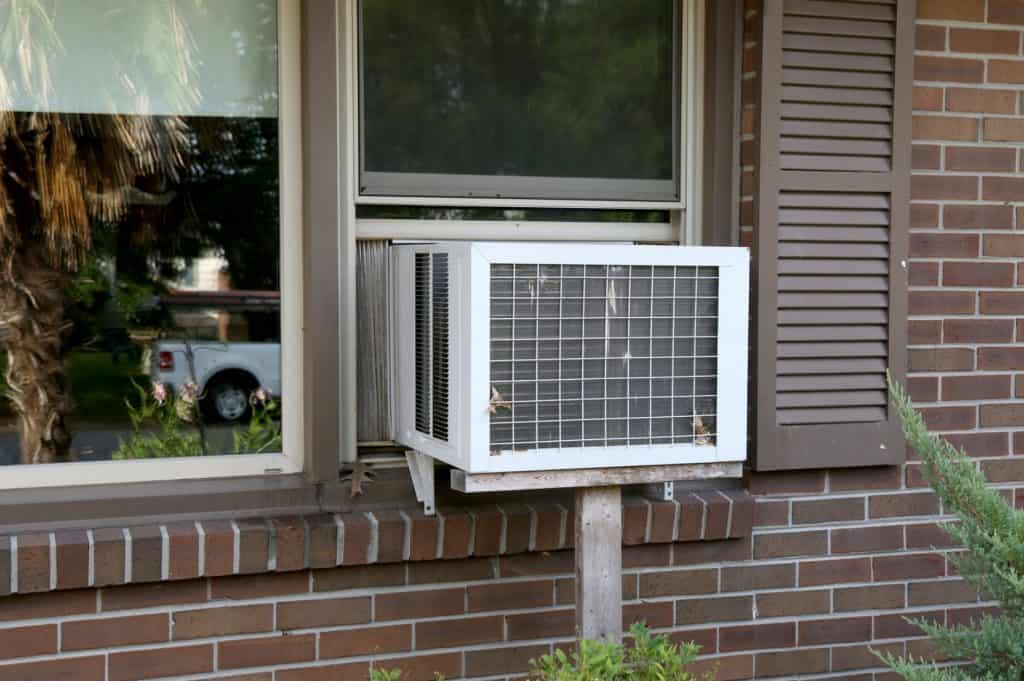 The first time you switch on that air conditioner in the summer, it really does seem like magic. Especially if you’ve had to go without it for any length of time.

With wildfire smoke and environmental pollution like car exhaust, it can be of concern when switching your window-mounted unit on. But should we worry about this? Do ACs actually pull outside air into your house?

Window mounted air conditioners do not pull outside air into the home. They work by circulating the air inside the house, cooling it, and dumping the excess heat outside the home via an exhaust system. All of the air blown through an AC unit into the home is recirculated air.

Good news, huh? Though the air conditioners outside the home might not be the best, you don’t need to worry about your unit pulling those contaminants into your home.

You only need to expect that sweet, chill air. So, to learn more about the process and some other concerns you may have, read on.

A Window Air Conditioner Will Not Pollute Your Home

Air conditioners are never designed to bring in air from outside the home. They are considered a sealed system in that they will only operate on the air within the building’s ecosystem in which they are installed.

Because the vent warmer air outside, it is easy to make the mistake that the system somehow moves air from outside in.

You might notice that you find that the filters of your window-mounted ac have become filthy during times of high smoke pollution.

Thankfully it isn’t because the unit is pulling the smoky air in.

Instead, it is the pollution that has found its way in your home via doors, open windows, or the small cracks around the unit itself.

The filters get dirty from this pollution when the unit cools the air inside the home. The filters catch pollution to protect the machine from choking on particles in the air and clean the air that gets recirculated. There’s no sense in pushing around dust-laden air.

How Does A Window Air Conditioner Work?

It might seem like there is some complicated process at work here, but it is relatively simple when you break it down.

There are only a few simple steps involved that help make your living environment much more hospitable. Here’s what happens when you switch that unit on.

The Unit Gets the Air in the Room Moving

No one likes hot, humid, stagnant air. Even in times past, people would instead wave a paper fan or even a palm frond to get the air moving.

Air moving over a sweaty body is a quick way to cool it down. Moving air is also easier to cool.

When you turn on your AC, the blower motor kicks on and begins to pull air into the window-mounted unit.

As the machine pulls in air, it blows air out, creating a cycle of air that is continuously cooled as it is pushed and pulled.

The trick is that the unit only operates on the air already inside the home, cooling small amounts at a time.

The System Cools the Air via the Cooling Coil

Simultaneously, as the blower begins to move the air, the machine’s cooling coil begins to drop in temperature as the refrigerant inside the coil is put under pressure by a compressor. As the air moves across the coil, it falls in temperature as it is blasted back out into the room.

As the continuously-moving tide of air keeps dropping in temperature, the more the air is circulated and mixed.

The machine also lowers your home’s humidity during the process, as condensation collects in the device. The drier air mixing with the more humid, unprocessed air can cool things down even faster.

As the system cools the circulating air, it extracts quite a bit of heat in the process. If you’ve put your hand in front of the external exhaust of your AC unit, you probably noticed that it could get quite warm.

This happens because the unit’s compressor absorbs the heat generated in the process and blasts it outside of your home via exhaust fans. This part of the process is called the hot air cycle for a very discernible reason.

Even though heat is displaced outside the home, there are still no direct means of ventilation connecting the outside air to the inside.

They are entirely separate parts of the machine’s operation. So, even if you do feel that hot air blowing outside the home, you can rest assured that it isn’t coming back in.

The AC unit is always monitoring the temperature of the room via the unit’s thermostat.

This allows it to drop or raise the temperature of the coil to cool the space better.

Certain “smarter” units can also adjust the blower’s intensity to change the amount of air it moves into the room.

The faster the system moves air, the faster it cools. When you set your system to the coolest temperature, it will work until it has reached that desired temperature, and then stop.

Some units may have a straightforward thermostatic device that simply switches things off, while others have advanced systems that perform further monitoring and automatic adjustments.

Your AC Unit Filters the Inside Air

Dust is everywhere. And unless you spend every waking moment of your life dedicated to its eradication, you’re going to have dust floating around in the air of your home. Thankfully, your AC unit is prepared for this unavoidable dust.

While the unit’s filters will easily clean the air, it will be up to you to ensure that the filters themselves are cleaned periodically.

Too much dust build-up on the filters means that the machine will get stressed trying to move air.

It may shut down or break. Luckily, it is pretty easy to clean most kinds of filters by simply removing them and wiping them off with a cloth or a quick suck from the vacuum.

Some units, particularly portable systems, which we will talk about a bit later, have multiple air filtration stages that must be cleaned.

They also usually contain water tanks that collect condensation from the machine that must be emptied regularly.

There isn’t a lot of maintenance involved with these types of machines, and thankfully, what little maintenance there is, is easy to take care of.

Another great part of some newer machines is that they will let you know when filters need to be cleaned or reservoirs need to be emptied. Isn’t modern technology neat?

So, it isn’t all that complicated. Nearly all AC units work on the same principles; circulating interior air, cooling it, and dumping the generated heat outside.

There isn’t a lot of differentiation in the types of units you can buy for your window. As they get more expensive, they work more efficiently or offer more features.

There are two main types of window AC units that you’ll find on the market, neither of which would ever introduce exterior air into your home.

Standalone AC units are the most recognizable style of window air conditioners. They are those classic box-shaped machines that sit directly on the window sill.

They tend to be very easy to install and are highly portable, though often a bit heavy.

They are also louder than other air conditioners’ styles and can be less efficient, especially with older style windows that are harder to seal.

All of this is made up by the fact that they’re usually pretty cheap.

Ensuring that you form a good seal around your window unit will make your air conditioner more efficient.

By reducing the amount of warm air that creeps in around the gaps in the machine as well as the cool air that escapes out of those gaps, you will spend less money on electricity, and the unit will not have to work as hard.

They are recognizable in that they have two parts. A taller tower-style conditioning unit and a long exhaust hose connect to a window fitting for exhausting the warm air.

They often have wheels on the bottom and air super easy to move around for cleaning and rearranging. They tend to be a bit more expensive than the standalone window units, but they tend to have many modern features like:

So, we learned that you don’t need to worry about your AC unit pulling outside air into the house.

This can be incredibly relieving if your area is suffering from foul air due to wildfires or other environmental pollution.

Thanks to our continually improving technology for air conditioning, there are options to cool your house that are cost-effective and work to keep your home a comfortable and sealed environment.