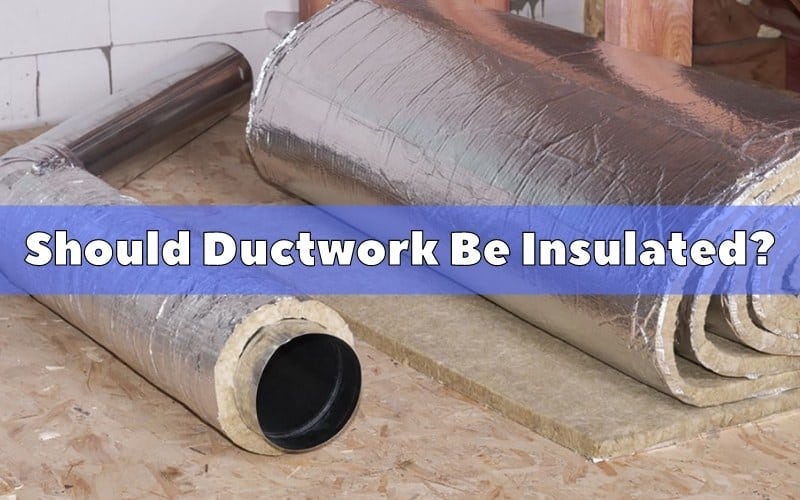 A common topic of debate among people who are building or renovating a home is whether or not the ductwork in the heating and cooling system should be insulated. There are proponents of both sides. Some argue that it’s needed during certain seasons, while others argue it’s unnecessary.

Ductwork should be insulated. Insulated ductwork provides money and energy savings and prevents ice from forming on pipes when it’s cold. Potential arguments against ductwork insulation are that it can be costly depending on the materials used, and that it may cause mold and condensation issues.

This article will discuss some details about insulation for your ductwork to help inform you of which side has better reasoning behind it.

Why Ductwork Should Be Insulated?

Ducts act as large conduits to distribute air throughout the home. The most important reason why any metal conduit would need insulation would be for energy efficiency reasons because they can lose anywhere from 10% to 50% of their energy through various ways if they’re not correctly insulated.

Ductwork should have insulation to prevent cold and warm air from escaping during the winter and summer seasons, respectively. The primary reason you should insulate your ducts is to save on energy costs.

It makes sense if you think about it; it’s like paying for gas to heat or cool your house, but then the wind blows the flame out, and you’ve wasted all that money (been there?). You might as well be using a blanket or something else you can reuse over and over again.

Read: Ductwork Insulation: Everything You Need To Know

When you have ductwork insulation, you’ll be able to reduce the temperature of your home by several degrees because the heat won’t escape out of your registers as much, providing a more even temperature throughout the house.

This will save on energy costs in two ways: first, because there’s less heating/cooling needed, and also because the furnace or A/C won’t have to work as hard to bring the temperature up to where it wants it to be.

If you use an HRV (heat recovery ventilator), which recycles air throughout the house so that not all of it gets recirculated over and over again, you’ll be saving even more money since the HRV uses less energy to cool the house.

If you don’t insulate your ducts, you may end up with uneven temperatures throughout different rooms in your house if one room is colder than another—since the cold air will be coming through the register in that room, but not in any others.

This can also happen if there’s a lot of sun exposure where one room faces west and is hotter than the rest of the house all day long (because it heats up more). If this happens, you’ll need to turn on fans or open windows to equalize the temperature since having warmer spots here and cooler ones there will make everyone uncomfortable.

If your HVAC ductwork isn’t well-sealed and insulated, it could also lead to several other issues, including:

If you’re considering insulating your metal ductwork, we recommend blown-in insulation rather than duct wraps because they’re much easier to install and generally provide better results. If you want something even more efficient but slightly more difficult to install, we also offer dryer vent kits that come with aluminum foil-faced insulation meant specifically for dryer vents.

Read: How To Increase Airflow In Ductwork

During winter months, when ice forms on your pipes due to extreme temperature changes, insulation will help keep your household comfortable, as well as help you save money on heating.

Insulating ductwork has the same benefits for homeowners that it does for pipes—the hiatus of hot or cold air in certain spaces will be minimized. By insulating the ductwork throughout the whole house, each room will have a more even temperature because there won’t be any spots where warmer or cooler air is coming through.

During the winter months, insulation will help prevent ice from forming on your pipes since extreme differences in temperature are less likely to occur. Insulation also helps prolong the life of your furnace, so you’ll end up saving money over time on heating costs since insulation slows wear and tear on all of the home’s systems.

Read: How Hard Is To Replace Ductwork?

One point against insulation would be that even though having insulation in your ducts will save energy; it won’t stop the loss completely.

In warmer climates, condensation from cold air coming into contact with warm air from inside the house isn’t as much of an issue since there isn’t such a drastic difference between exterior and interior temperatures. However, if you have quite a few leaks in your system, then you should take caution because it would be wise to prevent mold growth by insulating.

Read: How Hot Can Ductwork Get?

The High Cost of Ductwork Insulation

The cost of insulation itself isn’t that much. However, installing it can be a costly process, depending on the extent of your ductwork and how you choose to insulate them. For example; Duct sealing compounds are less expensive than spray-in foam insulation and can help increase your energy efficiency almost as much (for a fraction of the price).

And if you intend on hiring someone to do this job for you, costs vary from $1-$6 per linear foot for labor only (not including any parts or supplies needed), which averages out to  $50-$200 for most homes. Here are some average costs for various home square footage.

In the end, it depends on your personal preferences and needs, as well as how accessible the ducts are in your home to be insulated. For example; If you have a split-system central air conditioning unit, the ductwork will need to be more accessible to be worked on or replaced if needed.

One of the more common problems with some types of duct insulation is that they can cause condensation and mold growth. This occurs when the air inside your home becomes humid and warmer than its surroundings, such as on a rainy day. After the humidity has passed, you’ll be left with a musty smell in your HVAC system because of all the condensation on the uninsulated ductwork.

Condensation can become present in insulated ductwork when the air temperature inside your home is more than 6 to 8°F (-14.44 to -13.33°C) warmer than the temperature of the surrounding air. This problem can be exacerbated when the humidity in your home reaches 50 percent or more.

To avoid condensation problems, some HVAC professionals try to keep it under 35 percent during humid months (spring and summer).

Another concern is that mold may begin to grow on any insulation over time. For example, if you install spray-in foam insulation on uninsulated ductwork without first installing a vapor barrier like plastic sheeting or foil tape, moisture will seep through your insulation and cause condensation. Eventually, this can lead to mold growth on the backside of your insulation where you can’t see it.

Read: Should Ductwork Be Replaced After 20 Years?

Ductwork insulation is obviously a nice-to-have and is especially beneficial if you live in a cold climate. If you don’t already have insulation and haven’t considered it, add insulation to your ductwork as soon as possible.