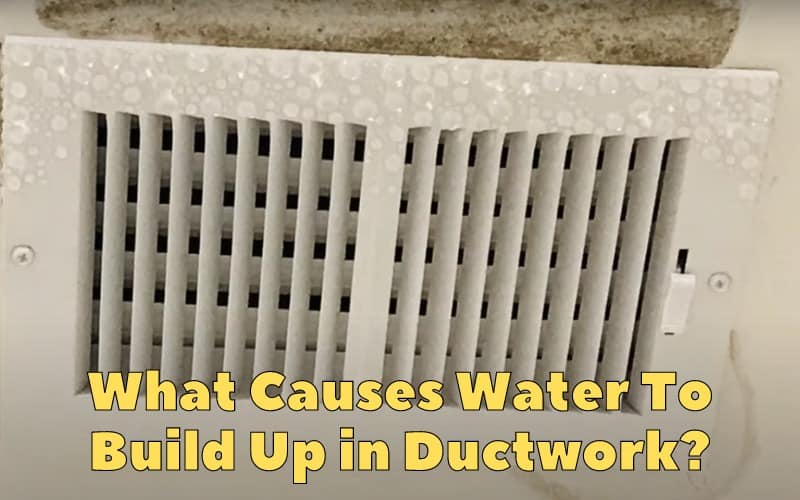 Water in your HVAC system can be quite problematic. Not only does it cause foul odors, but it can also be a health hazard. The best way to prevent these unwanted symptoms is to know what causes moisture to puddle in the ductwork throughout your home.

Water builds up in ductwork due to leaky HVAC pipes, excessive humidity in the building, and roof leaks. These can be treated by using dehumidifiers and sealing the leaks. However, it’s essential to remove moisture, mold, and mildew from the ductwork to prevent them from spreading.

Throughout this post, we’ll explain why there’s moisture in your ductwork, what you can do about it, and why it should be removed and treated as quickly as possible.

Most Common Reasons Water Collects in Your Ductwork

There’s water in your ductwork because there’s a leak somewhere in the plumbing, HVAC system, or roof. Water leaks can lead to moisture throughout the building, hindering the ductwork’s ability to heat or cool the space. Another issue is when there’s a lot of moisture dripping from condenser coils.

In fact, Jenkins Restorations reports that the vast majority of water in ductwork is caused by leaks in the HVAC system or roof. Rainy days can tear through the room, drip through the attic, and puddle in the pipes.

It can also happen if you have whole-house humidifiers or multiple portable humidifiers in your home. Use a hygrometer to manage the humidity. Your home’s humidity should range between 35% to 45% to prevent the ducts from getting too wet or moldy.

Read: Residential And Commercial Ductwork – What Are The Differences?

How To Get Rid of Water in Ducts?

To get rid of water in ducts, follow these steps: TapePlus Aluminum Foil Tape
$17.99 ($0.09 / Foot)
Buy on Amazon
We earn a commission if you make a purchase, at no additional cost to you.

What Happens if Water Gets in Ductwork?

If water gets in ductwork, it can cause mold growth, reduced airflow, and limited temperature control. Additionally, moisture can weaken the HVAC ducts, increasing the likelihood of cracks and dents. These problems all become exponentially more expensive if they’re not treated as soon as possible.

Here’s an in-depth look at each of these issues:

A little bit of water in a building’s ductwork isn’t uncommon, especially if the building is old. However, it must be handled if it forms mold, mildew, and clogs. It also needs to be dealt with if the air can’t properly flow through the HVAC pipes, drastically limiting your ability to ventilate the structure.

Read: Does Ductwork Need To Be Sealed?

How to Know if There’s Moisture in Your HVAC Ducts?

To know if there’s moisture in your HVAC ducts, look for these signs:

Read: Should Ductwork Be Insulated?

While water in your home’s ductwork can be damaging and dangerous, it can be remedied to prevent it from worsening. Testing your home’s humidity and managing small leaks can make a big difference. Additionally, it’s a good idea to improve and monitor your home’s insulation.