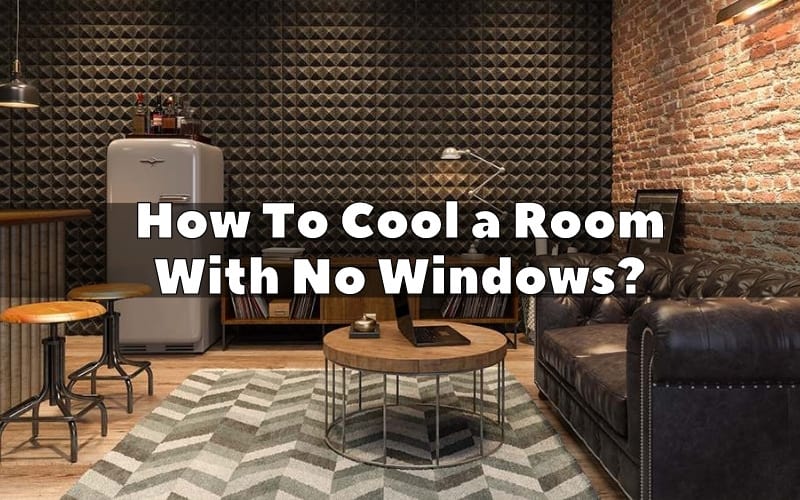 Usually, when it gets too warm, all you need to do is open the window and switch on the fan. However, not every room has windows. So what, if anything, can you do to lower the temperature in a windowless room?

Here are some ways to cool a room with no windows:

A windowless room needs fans to keep them cool. If you don’t have a fan yet, you’ll need to get one, if not more, to cool your room. Fans circulate air through the room, clear the humidity and help you to cool down on hot days.

Ceiling fans offer excellent coverage in the room. Since the fan is on top facing down—usually with large blades—this fan allows for a blast of air to cool you down. Ceiling fans also don’t take up any wall or floor space, so they’re a good bet if you’re in a tight area. However, you’ll need to hire an electrician to install a ceiling fan.

Wall fans are not the most effective variety of fans. Depending on the fan’s strength, you may struggle to find a wall fan that effectively cools a room. However, a wall fan is used alongside other fans to improve the airflow in your room.

Portable fans table fans are smaller in size. You can position these fans to blow air directly onto you so you can stay cool. Table fans can even be placed on a desk or table to maximize the flow of air to your head.

Read: How To Keep A House Cool In Summer Naturally?

2. Use Ice Behind the Fans

Fans pull air from behind them and force it straight out in front. This allows air to circulate and offers a cooling effect. However, the air itself is not any cooler; it’s just a sensation that you feel.

One way that you can improve this technique is by using a bag or large block of ice. Place the ice behind the fan, and the fan will pump cold air around the room from above the ice. This is like a makeshift air conditioning unit that’s cheap to run and install.

You can purchase large amounts of ice from your local grocery store to use this technique. If you want to save the hassle of trips to the store, fill a large container with water and place it in a freezer. It will likely take a while for a large container of ice to freeze, so you will probably need to wait overnight for the ice block to form.

Remember to place the ice on a container that’ll catch the water that melts from it. Otherwise, you’ll have a large pool of water near a fan likely plugged in at the wall.

Few people know this trick, but it’s very effective. It involves creating a similar effect to using a window and a fan to cool a room, only without a window. You’ll need to open the door and have two fans, ideally including a ceiling fan, to do this method.

Follow these steps to create an airflow in a windowless room:

Following these steps will create an airflow in the windowless room. Doing this will cause air to be pushed out the door while allowing cooler air in from outside the room. This technique mimics the effect of opening a window while running a fan in the room.

Read: Can A Mini Split Cool A Whole House?

4. Turn on the Air Conditioner

Another option for cooling a windowless room is by turning on the air conditioner. This method is the most effective but also the most expensive.

Air conditioners use similar technology to your refrigerator to reduce the temperature in a room so you can cool down. However, there is a variety of air conditioners that you can use to cool a room, including ventless, portables, ductless, and through-the-wall ones.

Read: Why Heat Pump Heats But Does Not Cool?

Portable Air Conditioners Are Easy To Move Around

Ductless Air Conditioners Are Cost-Effective in the Long Run

Through-the-Wall Air Conditioners May Not Suit All Windowless Rooms

Through the wall, air conditioners rely on a hole in the wall that allows the air conditioner to function. As a result, the room you want to place the conditioner in will need a wall that connects to the outdoors. This variety is not an option in some windowless rooms as such a wall is not available.

Read: How Long Should It Take To Cool A House?

5. Switch Off Any Appliance You’re Not Using

Many appliances emit heat when they’re operating. Therefore, leaving certain appliances turned on can cause your windowless room to heat up. Switch off appliances when they’re not in use to prevent this from happening and to conserve energy while saving on your utility expenses.

Common appliances like refrigerators, kettles, coffee machines, ovens, washing machines, and more all increase the temperature in the room in which they’re placed.

If you need to keep certain appliances running, like a fridge, move the device to a room with windows. This will keep your windowless room cool, and you won’t have to worry about switching them on and off.

Incandescent light bulbs only emit a small percentage of the energy that enters them as light. Roughly 90% of the electrical energy that flows through an old-fashioned bulb is emitted as heat. As a result, using incandescent bulbs in a windowless room will increase the temperature.

Swapping incandescent bulbs for LED lights will also reduce your energy usage. As a result, this method will cost you very little, but you’ll also make significant savings on your energy bills in the long run.

Cooling a room without any windows may seem like a challenge at first. However, there are some tricks and techniques that you can use to lower the temperature. Just remember these key points when trying to cool your windowless rooms: