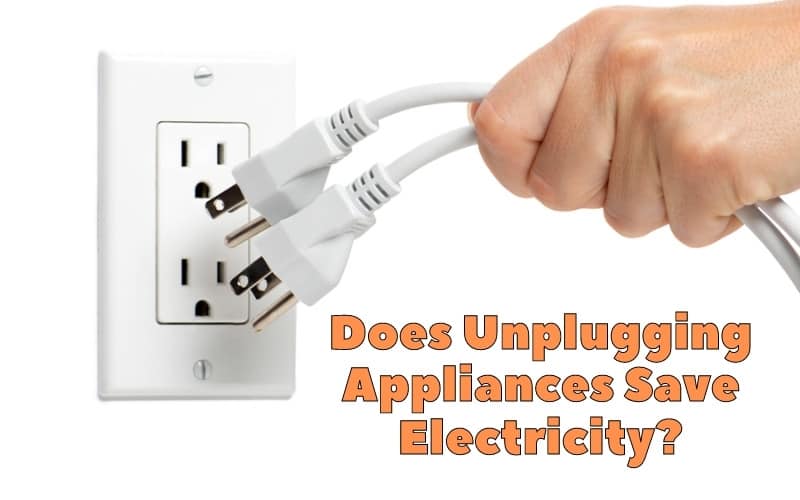 Unplugging an appliance that you’re not using will take you a second, but these efforts can potentially result in significant energy savings.

Some appliances will continue drawing electricity even when they’re turned off – this standby power accounts for 5-10% of residential energy use. If you manage to unplug all these devices, you’ll be able to save up to $200 per year and you’ll minimize the risk of a home fire.

Does Unplugging Appliances Save Electricity?

A lot of devices run certain functions while they’re still plugged in. This means that they’ll continue driving your bills up, even if you’re not using the appliances.

Here are just a few examples:

This ‘vampire’ power accounts for up to 10% of residential energy use, and that is the exact amount of energy that you’ll be able to save if you simply unplug the devices.

Does Turning Appliances Off at the Wall Save Electricity?

Unfortunately, plenty of appliances will continue to draw electricity even when they’re switched off (but still plugged in). These include lamps, toasters, TVs, and a lot of other devices.

To turn your TV on with remote control, it has to be on in order to receive the signal. Any ‘smart’ device has to stay on to be online and anything that has a display has to be drawing power to light up that small screen.

Read: Does Central Heating Use Gas Or Electricity?

Does Unplugging Toaster Save Electricity?

The chances are high that your toaster wouldn’t be using any energy when it’s switched off as these appliances do not have a computer in them and you can turn it on and off with a physical switch, not a remote.

So, unplugging a toaster might not save you any electricity, but it can potentially save your house from a fire in case of a power surge.

Read: Do Dehumidifiers Use A Lot Of Electricity?

Does Unplugging Lamps Save Electricity?

If your lamps have a timer, then they might be consuming a tiny amount of electricity, but you wouldn’t be able to significantly reduce your energy bills if you choose to unplug every single lamp around the house.

Instead, you might want to replace any remaining incandescent light bulbs with energy-saving LEDs.

Does Unplugging Microwave Save Electricity?

A microwave will be draining electricity even when not in use, but the amount of energy wasted would be relatively small. If your appliance has a clock or a small screen that is always on, then it will most definitely require power all the time.

In a year, your microwave might end up using 35 kWh. If that’s the case, then you may want to consider upgrading to a newer model – those have reduced energy consumption in standby mode.

Does Unplugging TV Save Electricity?

A TV is one of those appliances that you might actually want to consider unplugging as it consumes a considerable amount of electricity even when switched off. In fact, you might be able to save around $54.

Read: Do Mini-Splits Use A Lot Of Electricity?

Does Leaving a Charger Plugged in Use Electricity?

A charger that is plugged in will still be drawing electricity. It will be using only about 0.1-0.5 watts per hour and that will add up to about 45 cents per year which is not bad at all, but leaving the charger plugged in 24/7 might simply not be safe.

Do Power Strips Use Electricity When Turned Off?

Smart power strips will be using a small amount of electricity, but that is to find out when to cut the power off to all the other appliances that are plugged in.

The on/off switch on the power strip can be used to turn off the electrical flow to the devices that are plugged into it, but the actual strip would still be plugged in which means that it will be consuming a very small amount of energy.

With that being said, if you manage to use your power strips strategically, you’ll be able to minimize all phantom loads in your house.

Read: How Much Electricity Space Heaters Use?

Is It Better to Unplug Appliances When Not in Use?

Unplugging the appliances that you’re not using will take you a few extra minutes, but it is definitely something that you might want to consider doing if you want to save energy and improve safety.

Why Should We Unplug Appliances When Not in Use?

Do You Save Money by Unplugging?

The savings associated with unplugging one device might not be significant at all. But if these small costs add up, you will see a noticeable decrease in your energy consumption.

In fact, you can end up saving 5-10% on your electricity bill.

How Much Does Unplugging Electronics Save?

What Is the Cheapest Time of the Day to Use Electricity?

Another way to lower your energy bills is to use electricity during off-peak hours.

In the summer, these off-peak hours usually line up from around 5 p.m. to 10 p.m. (after the hottest part of the day when people tend to turn off their air conditioners). In the winter, the off-peak hours are between 9 a.m. and 5 p.m. as homeowners like to keep their furnace on at night.

You would have to consult your electricity provider, to find out the exact timeframe.

What Appliances Use the Most Electricity When Turned Off?

Smart TVs, cable boxes, and Xbox consoles are only a few examples of appliances that are constantly consuming electricity (even when turned off).

How Much Electricity Does TV Use When Off?

TVs in standby mode usually utilize 2.25-5% of the power used when the appliance is on. Even energy-efficient TVs can end up drawing 0.5-3 watts of electricity when off.

What Uses the Most Electricity in a Home?

Your HVAC system accounts for nearly 50% of the house’s energy consumption.

What Can I Turn Off to Save Electricity?

What Is Something You Always Have to Keep Plugged in to the Electricity?

You wouldn’t want to unplug your security system or a fire alarm, for example. Refrigerators and freezers should also be kept plugged in, if there is food in them, of course.