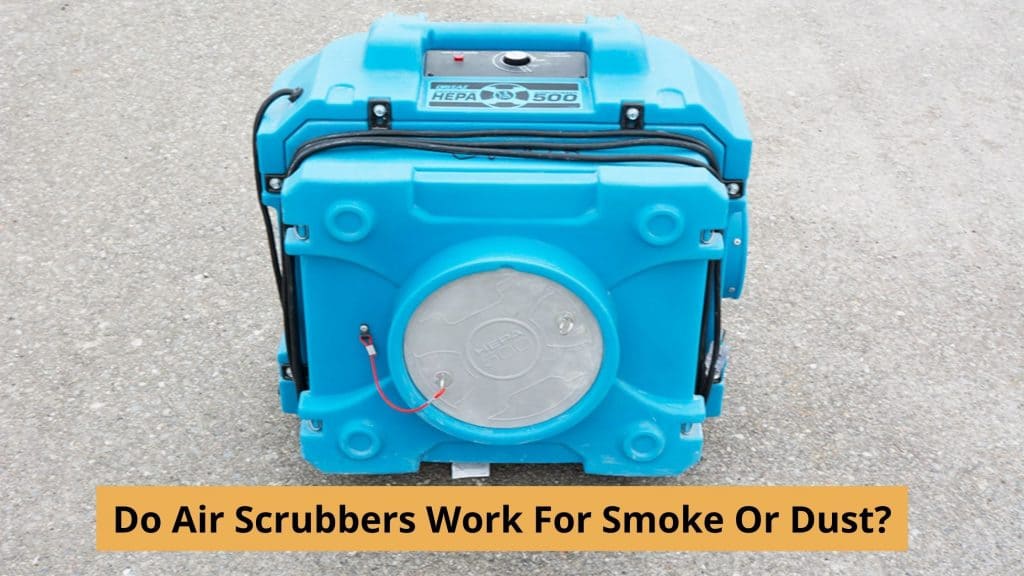 Yes, air scrubbers work very effectively for smoke and dust. They work to remove those two pollutants from the air through active and passive methods. The negative ions released by air scrubbers actively spread through the air and trap smoke and dust particles. Simultaneously, filters within the air scrubber, like pre-filters, HEPA filters, and activated charcoal filters all work to remove dust and smoke from the air passively.

In this article, we will look at air scrubbers and how their features work to remove smoke and dust from the air. At the end, we’ll also include a few tips on how you can maximize your air scrubber’s ability to get that job done, as well.

What Is An Air Scrubber And How Does It Work?

An air scrubber is an appliance that helps to improve indoor air quality. Standard air scrubbers will have a blower that forces air through a series of filters inside the unit. Each of those filters specializes in removing various pollutants from that air like dust, smoke, pollen and more.

Besides filtering different types of pollutants, the filters in an air scrubber also remove pollutants of different sizes measured in microns (a millionth of a meter).

What sets air scrubbers apart from other air quality appliances is that it also cleans the air actively. Besides forcing air through a series of passive filters, many also generate negative ions, which are spread throughout the room.

Negative Ions That ‘Scrub’ The Air

Negative ions bond very easily to airborne particles like those in dust and smoke. As that happens, the particles become too heavy to float in the air and fall to the floor or stick onto surfaces. From there, you can remove those particles easily by wiping or vacuuming those surfaces.

Besides that, negative ions also make it easier for the filter to catch particles that would otherwise be too small for the filters to catch.

Do Air Scrubbers Work For Smoke Or Dust?

Yes, air scrubbers are an efficient solution for removing both smoke and dust from indoor air. Air scrubbers work to remove these pollutants from the air in two ways:

Let’s take a closer look at how air scrubbers work when it comes to smoke and dust.

How Does An Air Scrubber Work For Dust?

Dust particles can vary significantly in size, ranging from 1-100 microns. To put that into context, the human eye can only see things that are 40 or more microns in size. Simply put, that means there is plenty of dust in your home that is invisible to you.

There are three ways that air scrubbers remove all of that dust from the air. They are through the pre-filters, the HEPA filters, and through the use of negative ions.

The first type of filter that an air scrubber has is a pre-filter. You can think of the pre-filter as the air scrubber’s first line of defense, capturing dust particles as small as 5 microns.

In doing so, the pre-filter reduces the burden on the other filters, which are designed to ‘scrub’ the air free of much smaller particles instead. In other words, the other filters will not get saturated so quickly since they don’t have to deal with dust larger than 5 microns.

As the air flows through, larger bits of dust will get caught in the pre-filter and build up there.

When the pre-filter is saturated, you can then wash or replace the filter, depending on whether or not it is reusable.

The next layer of passive defense against dust is the HEPA filter inside the air scrubber. HEPA filters, also known as High-Efficiency Particle Absorbing filters, are designed to capture particles as small as 0.3 microns.

Simply put, HEPA filters capture all the dust particles that you can’t even see with the naked eye.

Air scrubbers also work actively to scrub the air free from dust, thanks to the negative ions that they generate. The negative ions are generated in the appliance and blown out with the rest of the air, spreading throughout the room.

Negative ions ‘scrub’ the air by attaching to positively charged dust particles. When this happens, the dust will become far too heavy to float in the air anymore. Instead, it’ll land on the floor or stick to surfaces like walls and tables.

Firstly, that results in there being less dust floating around in the air for you to breathe. Second, it makes it much easier to clean when you wipe those surfaces or vacuum that floor.

Combining that with the passive filtration described earlier, and you’ll have a room that’s free from dust overall.

How Does An Air Scrubber Work For Smoke?

Smoke particles are generally smaller than dust. They can range from 0.008 to 0.6 microns in size. Still, air scrubbers remain effective against them thanks to the negative ions they generate and the filtration by HEPA filters and activated charcoal filters inside.

Earlier, we saw that negative ions travel out into the room and bond with pollutants. Not only does that happen with dust particles, but it also happens with smoke particles as well.

Whenever there’s smoke in a room, the particles spread all over. Negative ions generated by the air scrubber will also spread and attach to them. Much like dust, those particles will become too heavy to continue floating and fall to the ground or onto surfaces.

Remember: HEPA filters are effective at catching most particles down to a size of 0.3 microns. That means they’ll do an excellent job capturing plenty of smoke particles and reducing the indoor smoky air even further.

While negative ions and HEPA filters effectively reduce the volume of smoke particles in the air, they’re not so good at removing the smell of smoke from the air. That’s where activated charcoal filters, also known as activated carbon filters, come into play.

Not all air scrubbers have these charcoal filters, though most of them are compatible with them as optional add-ons. These filters are particularly effective at removing various odors from the air, including that of smoke.

Air scrubbers are highly effective at removing smoke from the air because they leverage various features at once. They combine the use of negative ions with HEPA and activated charcoal filters, all of which remove smoke particles, fumes, and odors effectively.

How To Maximize Air Scrubbers’ Effectiveness Against Smoke And Dust

Air scrubbers are efficient at what they do, but there are still steps you can take to maximize their effects. They include:

Air scrubbers will work their best when doors and windows are closed. That prevents outside air from circulating in and burdening the air scrubber. With windows and doors closed, only the dirty indoor air will pass through the air scrubber.

Pre-filters, HEPA filters, and activated charcoal filters will all become saturated after being used for a long time. That’s why it’s crucial to replace those filters promptly, so the air scrubber will continue to work efficiently.

Generally, here’s how often you should maintain the air scrubber’s filters:

Where you place the air scrubber is just as important as any other factor. You must place the appliance in areas with plenty of airflow, like hallways or wherever the concentration of dust or smoke is the strongest.

Never place an air scrubber in corners or behind furniture. Without proper airflow, the air scrubber can’t remove dust and smoke particles from the air efficiently.

If at all possible, keep the air scrubber slightly off the ground. Placing it on a workbench at a construction site, for instance, will help you achieve better results.

Air scrubbers will clean the air much more efficiently whenever there’s better airflow. But how can you get that without opening any windows or doors? Simply switch on the fan!

Ceiling fans, table fans, and any other type that you have available can be of great help to your air scrubber. By switching them on, the air will flow much better throughout the space.

That will give the air scrubber a much better chance at channeling dust and smoke through its filters, resulting in much better air quality overall.