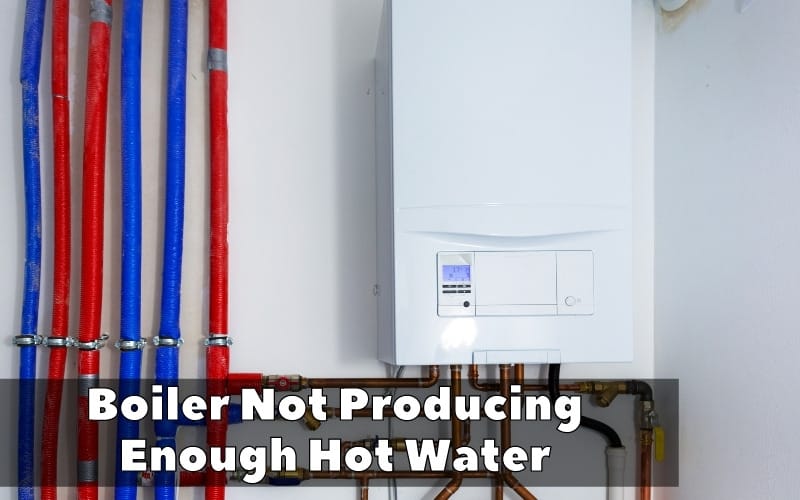 Perhaps, running out of hot water in the middle of a shower could easily make it to the top of the list of the most annoying things. What could possibly make your boiler stop producing hot water?

An undersized unit, thermostat issues, and a pipe or boiler leak might be to blame. The unit may run out of hot water altogether, in case there is a power supply issue, loose connections in the system, low pressure, or one of the components had failed.

Why Is My Boiler Not Producing Enough Hot Water?

The boiler is not properly sized

The majority of houses with up to 10 radiators and 1 bathroom would require a 24-27 kW combi boiler. If you have around 15 radiators and 2 bathrooms, then opt for a 28-34 kW boiler.

Do bear in mind however that an oversized boiler is just as bad as an undersized unit – the appliance would end up cycling on and off too often.

There is a thermostat/timer issue

The thermostat settings might be wrong. As a result, you won’t be getting the water that is hot enough.

Boiler timers can help you become more energy-efficient as they will automatically turn the system on and off. Simply make sure that the timer hadn’t turned the heating off.

There is a leak

The pipes or the actual boiler might develop a leak over time. In such a case, you might start receiving less hot water or no water at all.

Check the fixtures and joints as these are the places where the majority of leaks occur.

Why Is My Hot Water Running Lukewarm?

The thermostat’s sensor might be to blame. This device is the exact component that tells your boiler when to start working and when to stop.

If there is an issue with the sensor, the thermostat might shut the boiler down before the water reaches the desired temperature.

Another common issue is a scalded or blocked heat exchanger.

It is relatively easy to check whether the problem is with the heat exchanger or not. Compare the temperature of the plasma inlet and outlet pipes – both of them should become hot as soon as you open the hot water taps.

Why Is My Boiler Only Giving Warm Water?

Your boiler’s heat exchanger can get blocked throughout the years. If that’s actually the case, then the plasma inlet pipe will get extremely hot once you turn on the hot water tap, while the outlet pipe will be just a tiny bit warm.

The boiler might not be the right size for your house or there is a malfunction in the system.

If you suspect the latter, then make sure to check if the burner nozzle is clogged, the air filter is dirty, or the fan belt is damaged.

The actual fuel might also be dirty or you are simply running out of oil. Shut the device off a check the fuel level and quality in about an hour.

Boiler Runs Out of Hot Water

If the boiler suddenly stopped producing hot water, then this might be because one of the following reasons:

Lack of gas or electricity supply

There might be an energy issue in your area. The easiest way to check this theory is to figure out whether or not the nearby appliances have been affected as well.

The pilot light had gone out

Gas and oil boilers require a pilot light. If there is no gas supply, the pilot had failed, or a draft had blown out the flame, your unit won’t be able to produce hot water.

A loose connection might, for example, make the motor run without getting a burner ignited.

If the pressure is way too low because of a low water level, then the boiler would end up switching itself on and off. You should always make sure that the tank is at least half full.

If the pressure in the system is too high, you can attempt bleeding the radiators, but it might be a better decision to leave any pressure-related issues to the professionals.

Double-check, if the thermostat settings are accurate. However, at times, the device might struggle to maintain the right temperature, if it isn’t calibrated or if it had simply gone bad.

Finally, one of the internal parts might have failed. This can happen especially if you have had your boiler for over a decade.

Read: Is Furnace And Water Heater The Same?

Why Do I Never Have Enough Hot Water?

Here are a few most common reasons that you might want to take into consideration:

Why Does My Hot Water Only Last 10 Minutes?

This might happen if the boiler is undersized or if you have a few appliances running simultaneously.

For example, your dishwasher is going to need hot water, so you might not want to have a shower or bath when such an appliance is on.

Why Has My Hot Water Gone Cold?

How Do I Get More Hot Water from My Boiler?

If you need to make the water coming out of your combi boiler a bit hotter, then you can slow down the water flow. The water won’t be going as fast through the heat exchanger, so it’ll have more time to become hotter.

How Do I Increase Hot Water?

You would have to adjust the temperature of your boiler.

You might want to test the temperature of the water before the adjustment so that you can compare the numbers afterward.

Do bear in mind that if you have a combi boiler, you would have two separate controls for the taps and the radiators. Adjusting one would not affect the other.

With a combi boiler, the results should be instant.

The thermostat and the adjuster of a system or a conventional boiler are usually located on the actual unit (it might be under a panel).

How Do You Fix Lukewarm Water?

If your boiler is producing lukewarm water because the heat exchanger is blocked, then you can try gently tapping the element with a rubber mallet. This might work if your system has a light blockage.

For more severe cases, you would have to flush the whole system; you might even have to do that a few times. You can also buy a high-quality cleaner to get it injected into the system and clear out the blockages.

Where Is the Diverter Valve Located?

The diverter valve is the component that controls the flow of the ‘plasma’ – hot water.

When you need the central heating, the water passes through the radiators, and when you open the hot water taps, the plasma is sent to the heat exchanger which heats up the cold water.

When this element fails, the water from your tap becomes either lukewarm or completely cold.

Hint: when the heat exchanger fails, the water supply from the tap will be warm. You can take the temperature of the water into consideration when trying to figure out what part of the system is failing.

A diverter valve can be found in almost all combi boilers (conventional and system boilers don’t have such an element). You’ll usually locate it behind the bath taps – it looks like a level that can be pushed down or pulled up.

The actual mechanism is located inside the boiler.

How Do You Check a Diverter Valve?

You can also perform the following test:

Why Is My Combi Boiler Giving Me Hot Water but No Heating?