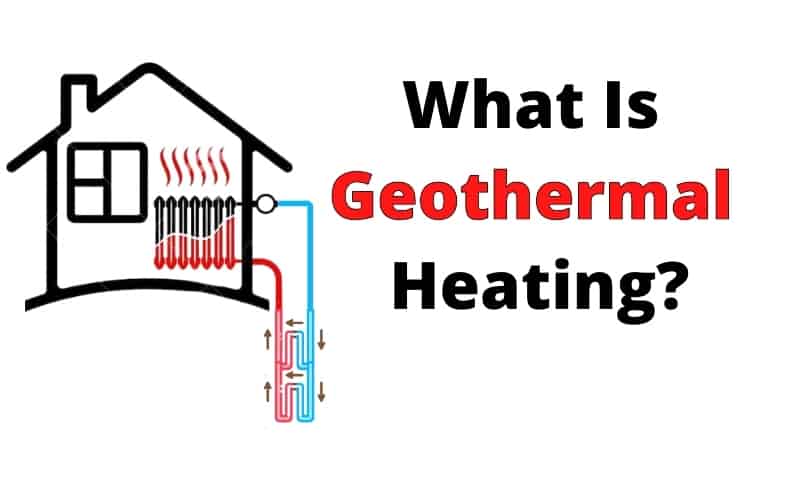 Geothermal heating might be the perfect solution for those who want to go greener and save a lot of money in the long run.

Geothermal heating systems use the ground’s temperature to keep our homes nice and warm. Though these systems do not make electricity, they are able to continuously transfer heat and either warm the house or cool it down depending on the time of the year.

How Does Geothermal Heating Work?

So, what is geothermal heating and how does it work?

Geothermal systems use stable ground temperature to heat and cool the houses.

Fact: there are ground-source heat pumps that take advantage of the soil’s temperature and direct-use geothermal systems that use bodies of hot groundwater. The latter can be installed only in regions with high geothermal activity.

Geothermal loops are systems of pipes that travel deep into the ground to the place where the temperatures remain constant year-round. The pipes contain a mixture of antifreeze and water (or just water) that circulates to either extract the heat or release it into the ground.

Depending on the type of property, the geothermal loop can be either vertical or horizontal.

A heat pump includes the compressor and the heat exchanger. It is responsible for making the antifreeze and water mixture move through the system.

The heat can get into the house through a forced-air system that requires an air handler and ductwork or a water-to-water system that includes pipes that run through the floor and walls in the building.

Is Geothermal More Efficient in Summer or Winter?

Geothermal systems work in heating mode just as efficiently as in cooling mode.

Even though a lot of heat pumps might struggle to keep the house warm during the extreme cold that is not the case with geothermal units as the underground temperature is never as low as the temperature of the air above the ground.

Read: When To Turn Heat On?

If a pipe is left exposed and the temperatures outside drastically drop, the pipe will first condense moisture and then frost over or freeze. However, the system should be able to operate just fine, in such a case.

Do bear in mind that in the areas with freezing winters, professionals usually choose to insulate the geothermal pipes that enter the house. They can also use an antifreeze solution in the pipes.

Is Geothermal Heating Expensive to Run?

Geothermal heat pumps can reduce energy consumption by up to 72% if compared with traditional electric-resistance heating.

Even though geothermal systems are expensive to install, they will help you save a lot of money in the long run as for every 1 unit of energy consumed, such systems are able to supply around 4 units of heat energy.

Is Geothermal Cheaper Than Natural Gas?

Geothermal units are much more expensive than gas heating systems.

Moreover, geothermal systems need electricity to operate and, in the majority of states, it is more expensive to heat your home using electricity than natural gas.

But that’s not the case with geothermal heating.

A lot of gas furnaces have are 80-90% efficient. That means that for every unit of fuel consumed, the unit is going to produce 0.8-0.9 units of heating.

Some geothermal heat pumps have an efficiency rating of over 400%. Moreover, some models can use the excess heat produced by the heat pump to heat up the water in your house (this significantly reduces the water heating portion of the bills).

Read: Why Is My Propane Heater Not Working? Troubleshooting Guide

Do You Need Backup Heat with Geothermal?

You are not going to need to buy a fossil fuel heating system to serve as a backup for your geothermal unit.

A properly designed and installed geothermal heating system will be able to provide you with all the heating that you might need.

Some systems come with a backup heater, but it is there only for the case if your geothermal unit fails entirely (which will, most likely, never happen).

How Warm Does Geothermal Heating Get?

The air coming from geothermal heating is not as hot as the heat produced by a gas furnace, for example.

But that is actually a good thing because geothermal units do not ‘fry’ the moisture out of the air and they are able to heat the house more evenly.

How Much Does It Cost to Install Geothermal?

Installing a geothermal system is expensive. The cost is going to depend on the plot size, soil conditions, the amount of digging required, and so on.

On average, a geothermal system is going to cost you 40% more than a traditional HVAC system. Be prepared to pay anywhere between $12.000 and $30.000.

The good news is that you will be able to recoup these costs through energy savings in 4-15 years.

Read: What Is The Best Way To Heat A Large Space?

What Are the Pros and Cons of Geothermal Heating?

Geothermal heating has quite a few important benefits.

Geothermal systems do not generate heat, they just transfer it. This means that the unit significantly reduces carbon emissions by not burning any fossil fuels.

Such units still need electricity in order to operate, but by switching to geothermal heating you’ll be reducing your house’s emissions by as much as 75%.

Geothermal systems have extremely low operating costs. Moreover, properly installed geothermal loops can last for over 50 years and these systems do not require a lot of maintenance.

Fact: the average lifespan of a traditional furnace is 15-20 years.

Finally, you will have access to geothermal incentives. Utility companies and government agencies offer financial assistance to those who decide to switch to renewable energy.

Homebuyers would definitely prefer to get a house that has a limitless heating source right in its backyard.

Geothermal is a quiet way to heat your house and practically all the parts of the system are out of sight.

Window AC units, propane tanks, and outdoor condensers do not only look bad and take up valuable space, but they might also be producing noise. Moreover, such equipment can get damaged which significantly impacts maintenance costs.

Moreover, the heat coming from such a unit is not going to be too hot, so it’s safe and comfortable to use throughout the house.

What Is Bad About Geothermal Heating?

It is expensive to install geothermal heating. Even though such a system can save you a small fortune in the future and you might be eligible for certain incentives, it is still a huge sum that not all homeowners can afford to spend.

Geothermal heating is far from dominating the market at the moment. This means that there are not that many experts who will be able to install the system correctly.

Do bear in mind that it is incredibly important to find an experienced professional as the efficiency of the system is going to depend on the quality of installation.

You can install geothermal units in a lot of places. But some homes are not suitable for such projects (the ones that have space constraints for drilling, for example).

Also, do bear in mind that your landscaping is going to be disturbed during the installation process.

Is Solar or Geothermal Better?

Geothermal can’t be used to offset electricity use, but it is recommended as a source of heating and cooling if such a system can be installed on your property.