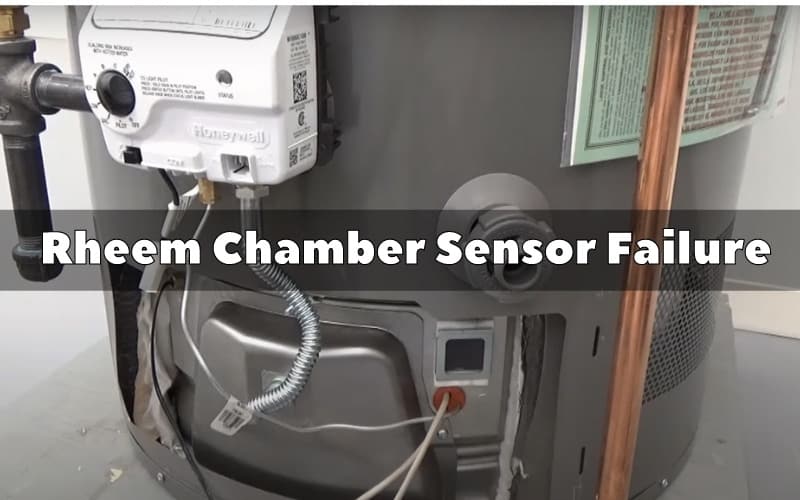 A temperature sensor, a flame sensor, a flammable vapor sensor – some water heaters can have way too many elements of this kind. No wonder, a regular homeowner would get confused if he ever sees a chamber sensor failure.

Chamber sensors control gas flow in gas water heaters. 9 red flashes on a Rheem unit are used to indicate the error code for a ‘chamber sensor failure’ – in such a case, you would have to tackle either the actual sensor or the gas valve.

What Is a Chamber Sensor?

A chamber sensor is either a thermocouple or a flame sensor. The reason why it is sometimes referred to as the ‘chamber sensor’ is because the element is located inside the combustion chamber.

Older water heaters have a thermocouple, while the newer models usually utilize a flame sensor. The main job of the element is to convert the heat from the flame to an electric current that then opens the gas supply valve and allows gas to flow into the burner.

When the device doesn’t sense the flame, it will prevent the gas from entering the chamber which makes it an incredibly important safety element.

What Does Sensor Failure Mean on a Hot Water Heater?

If the thermocouple or the flame sensor fails, then the pilot might not be able to ignite or the burner simply won’t stay lit.

The error code might also appear if the water temperature in the gas water heater is way too high. This will happen if the sensor makes the gas valve remain open even after the water had already reached the set temperature.

In a Rheem unit, the 9 red flashes indicate that there is a chamber sensor failure. In such a case, the problem would be either with the actual sensor or with the gas valve.

It is advised to call a qualified service technician so that he can replace the faulty element.

The chances are high that only installing a new sensor would fix the issue. Even though ideally, you would want a professional to take care of the problem, you will find plenty of chamber sensor replacement kits available online.

If you feel comfortable with these kinds of DIYs, then you can certainly attempt replacing the sensor yourself.

Bear in mind that, at times, the root cause of the error code might not be the chamber sensor, but the gas valve.

You may get the ‘chamber sensor failure’ error code if the sensor had detected flammable vapor.

Try letting in some fresh air and make sure that there are no strange smells around the water heater. In some cases, such a trick would make the unit reset on its own and get rid of the error code.

How Do I Reset My Rheem Water Heater?

There are a few ways to reset a water heater:

Read: Why Gas Water Heater Keeps Cycling ON And OFF?

How Do You Reset a Rheem Flammable Vapor Sensor?

If this was the reason why your unit shut down, make sure to check the room for leaking gas and for other flammables (even bleach can trigger the sensor, in some cases).

Only once you have gotten rid of the potentially dangerous products, you can move on to resetting the sensor.

Here are a few other things that can trigger the flammable vapor sensor:

How Do You Fix a Water Heater Flame Sensor?

At times, simply cleaning the element would be enough to fix the issue.

If the element had gone bad, then you would have to replace the sensor.

Always remember to disconnect all the connections from the gas control valve, turn it OFF, and close the shutoff valve on the supply pipe before attempting to change the flame sensor.

How Do You Fix a Flammable Vapor Sensor?

Make sure that the area around the water heater is clean and that there are no strange smells present in the room. Also, ensure that the air intake is not clogged.

If everything seems to be okay, then there is either a problem with the gas valve or with the actual sensor, and one of these elements would have to be replaced.

The water heater will draw in air through the opening in the metal door below the gas valve. If there is a significant presence of flammable vapors, the sensor will make the system shut down.

The most common things that can trigger the flammable vapor sensor include:

Read: What Type Of Water Heater Is Most Energy Efficient?

How Do You Test a Flammable Vapor Sensor?

You will need a multimeter to test the resistance. Remove the FV sensor from the bracket and disconnect both of the wires.

The resistance reading should be taken between the two wiring terminals. The reading has to be between 11k ohms and 45k ohms.

Is a Thermocouple the Same as a Flame Sensor?

Both of the elements have the same function, but they’re not the same thing.

Water heaters that have standing pilot lights have a thermocouple and the units with electronic controllers use a flame sensor.

The thermocouple is located right next to the pilot light, while flame sensors are there to detect whether or not the burners are lit.

Why Does My Water Heater Flame Keep Going Out?

Why Does My Tankless Hot Water Heater Go Cold?

Tankless water heaters are able to produce hot water on demand. Of course, you wouldn’t want the water to suddenly go cold.

But that can happen if…

Do Tankless Water Heaters Have a Pilot Light?

Gas tankless water heaters have a pilot assembly and burners. However, the majority of modern tankless units have a more energy-efficient ignition system.

This system starts the firing sequence as soon as the water heater’s flow sensor gets triggered by the water that was turned on somewhere in the house.

Is There a Reset Button on a Tankless Water Heater?

The red reset button is usually located right in the center of the control panel or next to the thermostat.