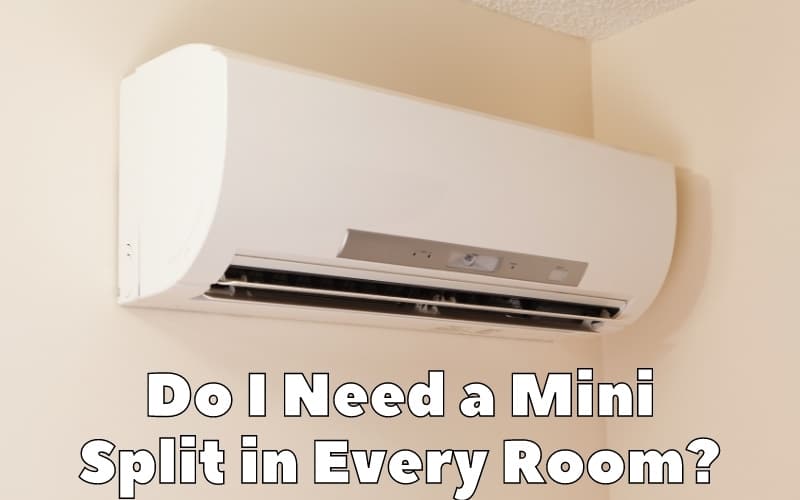 When the temperature fluctuates between the seasons, it’s good to ensure that your home stays a warm, comfortable place all year round. Having a ductless air conditioning system is becoming a popular solution. Mini splits are an excellent system for a big house with many rooms, or even an office or a school, but the question remains: do you need one in every single room?

You do not need a mini split in every room. There are some rooms in which it is better to have a mini split, and there are other rooms that will never need direct temperature control from a ductless system, such as a bathroom or a walk-in closet.

In the rest of this article, I will go through which rooms need a ductless system more than others, how a mini split works, and the cost implications of a multi-zone system.

Which Rooms Need a Mini Split?

Suppose you are considering installing a multi-room mini split system to better control the temperature and humidity in your home, office, or commercial space.

In that case, you need to decide which rooms prioritize others since there are some rooms in a home that would never need a mini split.

The rooms that should have a mini split in a home are usually bedrooms, the living room, the basement, the attic, and the office. These rooms are high-traffic and would benefit from having personalized temperature controls – especially if different house members have different preferences.

It is not sensible to have a mini split indoor unit in every room since that would be a waste of energy and time. For example, putting a unit in a small hallway is counterproductive since the unit would likely be too big for the space.

If a unit is too big for the space within which it has been installed, it can short-cycle. Short-cycling occurs when the unit turns on, blows out a quick burst of air, and turns off again.

Trying to keep the temperature regulated is difficult for an oversized indoor mini split unit and can lead to overexertion of the system. This will eventually mean that your ductless system won’t be as energy-efficient as it should be, causing your bills to go up.

When it comes to choosing which rooms get priority over others, your living room likely comes at the top of that list. Since it is a room with high traffic levels, it will need to be comfortable enough for everyone who enters the room.

The bedrooms are also quite important since people tend to have different preferences as to what temperatures they prefer to sleep in.

Having a separate system that can be remote-controlled is excellent for those people who like a different temperature and humidity setting in their bedroom to the living room.

Another thing you may need to consider is whether a room really needs a mini split unit. Sometimes, other factors at play, such as drafty windows, can be fixed before the need for an expensive heating and cooling system.

Read: Mini Split In Dry Mode Vs. Dehumidifier: Which One Is More Efficient?

Which Rooms Do Not Need a Mini Split?

Looking at your home and deciding which rooms need temperature control and which rooms don’t need anything at all can depend on the size of your house or apartment, the size of the rooms, and your budget.

The rooms that do not need a mini split include hallways, bathrooms, closets, or rarely used rooms, such as storage rooms with low humidity levels. It is unnecessary to place an indoor unit in one of these rooms since there are cheaper and more efficient ways to heat them.

For example, you can always use under-floor heating to heat your bathroom – or simply install a radiator to keep the room warm.

Storage rooms and walk-in closets definitely do not need temperature control since anyone who enters those rooms will probably not be there for long.

What Is a Mini Split, and What Does It Do?

Mini splits are becoming incredibly popular; they are highly energy-efficient and cost-efficient and are excellent for schools, offices, religious institutions, residential homes, and commercial spaces.

A mini split is a ductless air conditioning unit that is literally ‘split’ between indoor and outdoor systems. They provide both heating and cooling systems. In a multi-zone mini split system, multiple rooms can be controlled differently.

Each mini split unit has an evaporator coil, an air handler, and a blower to allow it to work efficiently.

You can install the indoor units on the wall, on the ceiling, or even on the floor – and you get to decide which rooms have the units and which rooms don’t need them.

They are small in size, easy to install and last for a long time – making them an easy choice for most people without a duct system for heating and cooling their home or commercial space.

Suppose you don’t have installed air ducts. In that case, mini splits are an excellent alternative that provides personalized and individual heating and cooling systems for any room and any number of rooms you like.

Even rooms that are difficult to maintain at a particular temperature, such as basements, garages, and attics, can have individual mini-split systems that regulate the humidity and temperature at the press of a button.

Cost Implications of Having a Multi-Zone Mini Split

Traditional duct equipment such as HVAC duct systems can be a great option if you already have ductwork built into your home, office, or commercial space. However, installing ductwork would be a significant expense, so mini splits are an excellent alternative.

A multi-zone mini-split system works by using multiple indoor units that are attached to an outdoor unit, which can hold around 4 indoor units at a time. If you have numerous indoor units, they can be installed and controlled in multiple rooms.

If you want just a single-zone system, your labor costs will be anything up to $1400. This is why many people choose to just put one indoor unit in a shared space, such as a living room or a kitchen.

However, there are some benefits to having a multi-zone mini split system:

If you want to have more control over the temperature and humidity in your home, or your office employees are squabbling over the temperature settings, then having a unit in multiple places makes it much easier – it may be more expensive, but it will likely be worth it in the long term.

Read: What Is Heat Pump? Everything You Need To Know

In short, you do not need a mini split in every single room. It would be a waste of money and manpower to install one throughout the entire property.

Using a priority system, you should decide on the essential spaces in your home, office, or commercial space that need individual temperature control. Remember that every outdoor unit can usually withstand up to 4 indoor units, so choose carefully which rooms are the most important for you.

Read: Why Is House Smells Musty?