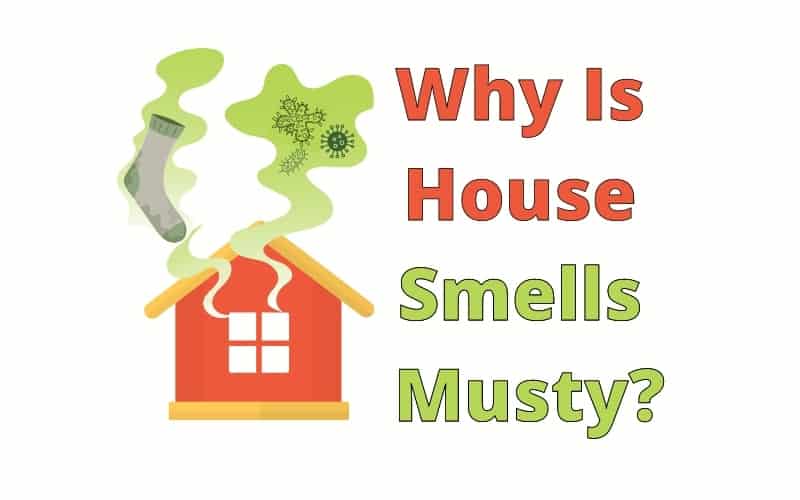 When you finally come back home from work or a vacation, the last thing you want is to discover that your ‘fortress’ smells like a pile of wet socks.

In most cases, a musty smell is associated with mold and mildew – the fungi will thrive in a house with high humidity. Moisture on its own can cause a musty smell, as well as poor airflow and cigarette smoke that had been soaked into the house’s soft surfaces.

What Is a Musty Smell?

It is incredibly difficult to describe smells.

This article is dedicated to the causes of a musty smell and the ways of getting rid of it. That’s why it’s important to make sure that this is the exact kind of odor you are sensing.

‘Musty’ might be a variant of the word ‘moisty’.

It’s the kind of smell you detect when you bring out your winter clothes that have been tightly packed away in your attic. The smell is stale, damp, and ‘unclean’.

Some describe a musty smell as ‘earthy’ or resembling the odor of rotten wood and wet socks.

What Causes Musty Smells in Houses?

Why is house smells musty? In the absolute majority of cases, it is because there is a mold or mildew problem.

Both mold and mildew are fungi, but the latter is usually more powdery and forms a thin layer on the contaminated surface. Mold is thicker and can end up penetrating into certain materials and causing structural damage.

The root cause of this issue is moisture buildup. Without moisture, mold and mildew can’t grow.

High humidity, leaky pipes, a damaged roof – all these things can contribute to the buildup of moisture.

The HVAC system can also become a breeding ground for mildew and mold. If the ducts are dirty and smelly, then the system will end up introducing the odors into the living area.

The worst part is that the smell can linger even after the homeowners manage to eliminate the mold. You might have to get rid of the curtains, carpets, and upholstery to make the odor go away.

Read: Why Is The Humidity In My House So High After It Rains?

Can a House Smell Musty Without Mold?

If you can’t seem to find any mold in your house, it might be because the fungi are inside the walls. Unfortunately, not all mold is visible.

However, this smell can be caused by other things as well.

Moisture will make your house smell musty. It might not have been there for long enough to contribute to the formation of mold, but moisture on its own can have a musty odor.

Various water leaks, front load washers that tend to retain a lot of water, and even windows that are ‘home’ to condensation buildup – the smell might be coming from these places.

Houses that have poor air circulation usually have a musty smell. Opening the windows and letting in some fresh air will, most likely, not deal with the root cause of the smell, but it might become more bearable.

Drywall, carpeting, and some other soft surfaces can soak in a lot of smells.

If a family member tends to smoke in the house or if the previous owner liked to do that, then the surfaces can be emitting a musty-like odor for years.

Read: How To Dehumidify A Basement Naturally

Why Does My House Smell Musty After Being Away?

Lack of airflow is to be blamed.

The longer the doors and windows remain closed in the house, the more intense the smell is going to be. If you have old carpeting and furniture, then the odor will be even stronger.

In a lot of cases, all you would have to do is air out the house as soon as you return. That’s exactly what the majority of realtors do before showing off the house to potential buyers.

The humidity level is much higher in the summer. This can cause excess moisture to buildup in your house which, in its turn, will lead to mold growth.

Humidity traps all sorts of odors making them travel farther and linger longer, so you might want to consider getting a dehumidifier for the warmer time of the year.

House Smells Musty When AC Is On

There are plenty of dark and humid places in the AC system where mold and mildew can start growing. So, even if the actual house doesn’t have a mold problem, it might end up having a musty smell simply because the odor is going to ‘travel’ from the air con to the living spaces.

Make sure to check the drain pan and the evaporator coil. Look for excess moisture in the vents and ducts and inspect the condensate line to ensure that it is not blocked.

Rread: Mini Split In Dry Mode Vs. Dehumidifier: Which One Is More Efficient?

Can Musty Smell Make You Sick?

The actual smell cannot make you sick. But mold, mildew, and high humidity associated with the odor can affect your health.

Exposure to the spores can cause allergic symptoms (coughing, fatigue, headache, itching, etc.). People with asthma or those who are prone to allergies might suffer from more severe reactions, like shortness of breath and fever.

The individuals who are most at risk are people with immune suppression, chronic respiratory diseases, and allergies.

When it’s hot and humid outside, our bodies begin to sweat a lot, but the sweat does not evaporate. As a result, our body is not able to effectively cool down and it can overheat.

We will start losing salt, chemicals, and water. This increases the risk of heat exhaustion and even heat stroke.

So, in order to stay healthy, you have to keep your house relatively cool and the humidity level below 50-60%.

How Do I Get Rid of a Musty Smell in My House?

Bear in mind that if all the tips mentioned below have not helped you get rid of the smell, then you would have to call a professional team to deal with the problem – there might be an extremely serious mold-related issue in your house.

This is the most difficult yet the most important step. Instead of trying to cover up the odor, you should find its primary source.

Inspect your bathrooms, kitchen, basement, and attic for mold. When it comes to the bedroom and living room, pay extra attention to the mattress, between the windows, and the potted plants.

Inspect the HVAC system (you might want to invite an expert to perform an annual cleaning).

If you have spotted mildew, you can use bleach or distilled white vinegar (a safer option) to deep-clean the surface.

To keep the air flowing freely, open the windows regularly and use the fans. If your bathroom and kitchen do not have an exhaust fan, you might want to consider installing one.

Baking soda and activated charcoal are natural odor absorbers that will help you get rid of the musty smell.

Replace the absorbers every 2 weeks for better results.

Keep the surfaces in your house as dry as possible. It will only take you a minute or two to wipe down the hard surfaces after cooking or showering.

If you ever notice condensation on your windows, wipe it away. And don’t forget to leave the washing machine open, so that it can air out between uses.

Will a Dehumidifier Get Rid of Musty Smell?

A dehumidifier will help you take excessive moisture out of the air. You can install one in the dampest room in your house (for example, the basement). Dehumidifiers also help get rid of the odors associated with dampness. So, yes, the device will help eliminate the smell, as well as protect the house’s electronics and prevent the wallpaper from peeling.