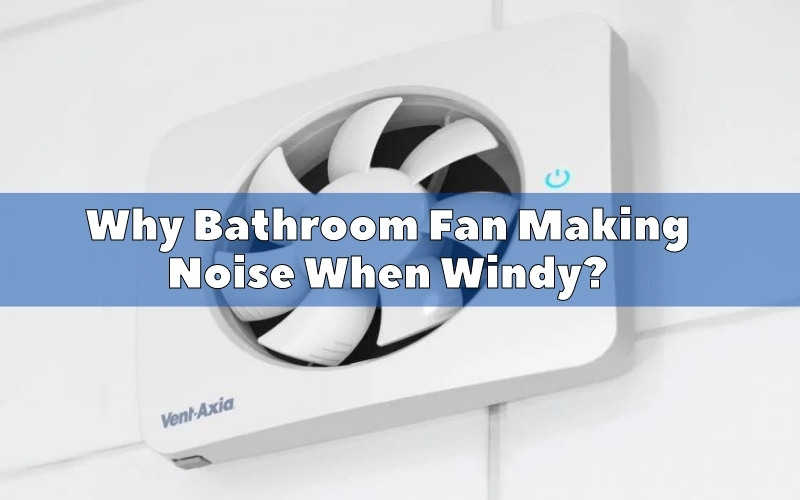 Bathroom vents can become notoriously noisy when it gets windy, making your home sound like a horror movie. If this banging sound doesn’t seem to go away, there’s a way to fix it. You won’t have to wake up in the middle of the night wondering if someone has broken into your house.

Your bathroom fan makes noise when it’s windy because its flapper gets raised by the wind, then drops down, producing the banging noise. Wind on the outside causes the air pressure to drop, sucking out the high-pressure air inside the house through the exhaust duct. This airflow raises the flapper.

In this article, I’ll explain why your bathroom fan makes noise when it’s windy. I’ll also give you practical tips to fix the loud sounds. Read on.

Reasons Why Your Bathroom Fan Makes Noise When It’s Windy

The bathroom fan’s primary purpose is ventilation. Although some homeowners or builders install ductwork in their houses, they also install a vent in the ductwork to improve ventilation.

You’ll likely find vents in the bathroom, kitchen, or storage spaces. House vents may or may not come with exhaust fans. However, most of them come with metal flappers, also called backdraft dampers, on the outside that fly open to release hot air from inside the house.

Below are some of the reasons behind your noisy bathroom fan.

Pressure Imbalance Between the Inside and the Outside

On windy days, the noise becomes increasingly frequent and unbearable. But there are ways to fix the noise. And you won’t even have to replace the entire bathroom fan.

The unpleasant noise from your bathroom fan might not be because of a faulty mechanism but rather due to a low-quality product. It’s worth spending a few extra bucks on a bathroom fan. The fan ventilates your bathroom by getting rid of clammy and unclean air. After a steamy shower, the fan extracts the high humidity, preventing mold development and water damage.

Therefore, you shouldn’t just buy any products out there. You need to make a careful selection. A general rule of thumb is that a cheap bathroom fan will make the loudest noise. This will become worse when it becomes windy. What’s more, it won’t thoroughly ventilate your bathroom.

Dirt build-up is another cause of noisy bathroom fans. Dirt and muck accumulate on the fan’s blades, motor, and vent, causing them to clog. When the wind blows, sucking out the warm air inside, the dirt on the duct walls causes irregular airflow, which causes the fan to become noisy.

Read: How To Fix A Noisy Bathroom Fan?

Your bathroom fan can become noisy if you install it incorrectly. It can make strange noises if its housing isn’t securely fixed in the ceiling. The whole unit will become shaky when you turn on the fan or wind blows.

Also, as you use the fan over time, its different parts and panels may become loose and out of alignment. As the entire unit loosens up, the fan’s blades might begin hitting the surrounding housing, producing knocking, vibrating, and rattling noises.

Read: 3 Reasons Why Water Is Dripping From The Bathroom Fan

Irrespective of the type of bathroom fan you have, its motor will require lubrication for smooth and quiet operation. Lack of lubrication can cause some motor parts to overheat and wear out, producing squeaking sounds as they grind past each other.

Some recent fan models have thermal cut-off fuses that disconnect them from the power supply in case they overheat—either way, you need to lubricate them from time to time.

How To Fix a Noisy Bathroom Fan?

Knowing what’s causing a noisy bathroom fan is the first step towards finding a solution. However, you need to have the right gear and also take proper precaution before heading to the attic to fix a noisy fan.

These are some of the ways you can correct your noisy bathroom fan.

You can use waterproof foam tape to reduce the sound from the impact between the flappers and the vent’s frame.

I recommend this HushMat HSM30300 Quiet Tape (available on Amazon.com). It adheres to metal, plastic, and fiberglass surfaces.

Once you get the tape, apply it to the edges of the flappers. Ensure it adheres properly where the flappers hit the vent’s frame. This technique should reduce the noise emanating from the metal clashes and is one of the cheapest and easiest ways to fix a noisy bathroom fan.

Add Weight to the Flappers

Adding weight to the vent flappers will make it difficult for the wind to lift them easily. However, you shouldn’t make them too heavy if you want your vent to still work correctly.

It’s best to use wheel weights with strong adhesives to adhere to the flappers. The weights should resist the frequent lifting by the wind and still let the vent operate effectively.

You can start with a ¼ oz (7.1g) wheel weight and see if the banging noise disappears. Add more weights if the flappers still bang.

Read: How To Save Heat In An Apartment?

Replace your regular damper with a spring-loaded backdraft damper. It comes with a rubber gasket that creates an airtight seal with the flapper. The seal stops unwanted airflow into the vent when the flapper is down and prevents it from banging on the frame. It also prevents air leakages.

It would be best if you had these tools to replace your regular damper with a spring-loaded one.

How to Replace Your Vent Damper

Thoroughly Clean Your Fan and the Vent

Don’t use compressed air to clean your bathroom fan. Instead, follow these steps to clean a dirty fan.

The fan should be quieter after you put everything back together. The motor might be to blame if the noise doesn’t go away. However, cleaning your bathroom fan is necessary even if it doesn’t produce any noise. It’s a way to extend its useful life.

A larger duct will reduce the pressure of the air extracted by the fan, thereby lessening the noise.

Dents and bends within your ductwork can cause eddies and friction in the airflow, which might make your fan noisy. Straightening your existing ductwork is cheaper and less invasive than replacing it.

Although a temporary solution, this can help reduce the air pressure and noise from airflow. Replacing the ducts with bigger and stronger ducts is a more permanent solution.

A noisy bathroom fan can be a nuisance to an otherwise quiet and serene home. If your bathroom fan becomes noisy when the wind blows, it is because of the flappers banging on the vent frame. It can also become noisy because of lack of lubrication on the motor and constricted vents.

Identify why your bathroom fan is noisy and use the above tips to fix it.