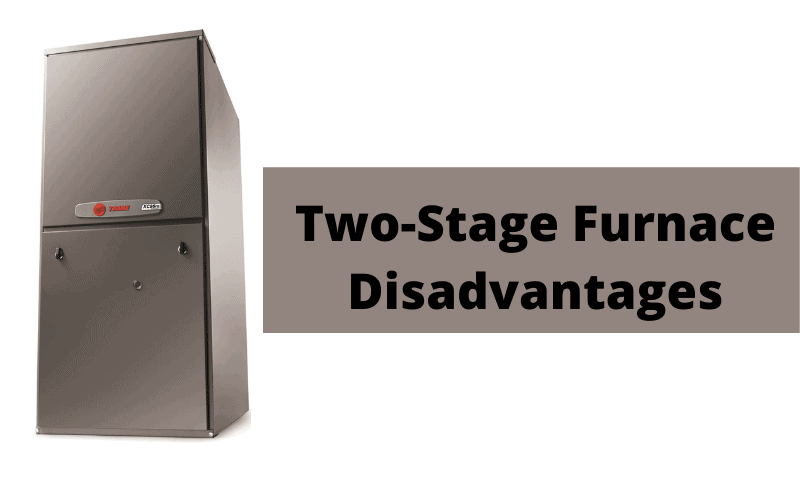 The winter months are almost here. If you’re looking for a new furnace to heat your home, you may be considering a two-stage furnace.

There are quite a few disadvantages to purchasing a two-stage furnace over a single-stage furnace, despite popular belief. These disadvantages include their initial high price point, inability to save you money in the long run, and high repair costs.

Manufacturers generally only talk about the benefits of two-stage furnaces. But these claims may not be as innocent as you think.

What are the Problems of a Two-Stage Furnace?

Despite what manufacturers say, two-stage furnaces are not precisely everything that they claim them to be. Each day more evidence amounts against these numerous positive claims.

Let’s explore these disadvantages in further detail to help you commit to a new two-stage furnace.

The first and most notable problem with two-stage furnaces is their initial high price point- this reigns true regardless of the controversy.

This is a notable increase in price for a two-stage furnace, considering that even single-stage furnaces cost a pretty penny, to begin with.

The second problem with two-stage furnaces is that if they happen to break, they cost far more to prepare because the parts are less common and more expensive (Source: The Comfort Academy). Compare this with single-stage furnaces, which are simple machines with universal parts and are inexpensive to repair.

So, all in all, two-stage furnaces have the potential to be a pretty expensive purchase both in the beginning and later down the line.

However, the biggest issue with two-stage furnaces is the controversy surrounding the legitimacy of the advantages contractors claim they hold. It’s essential to get your information from multiple sources to ensure you avoid any trickery.

Two-stage furnaces may be more prone to breakage in the first place. In fact, some people even claim that they’re made to fail earlier than single-stage furnaces so that you’ll keep spending money to replace parts (Source: The Comfort Academy).

Additionally, one of the biggest claims many sellers of two-stage furnaces will tell you is that you’ll end up making the extra hundred you spent on the two-stage furnace back due to the amount of money you save from its energy-efficiency. But can we actually trust this claim?

In the following sections, we’ll take a close look at that claim and many others. We’ll begin with a direct comparison between single-stage and two-stage furnaces.

The two-stage furnace’s single-stage counterpart, however, has two power settings- off and on (full power). This means no matter what, if your furnace is turned on, it’s running at full capacity. This has led to concerns regarding the energy efficiency of single-stage furnaces.

Contractors and manufacturers rave about the incredible number of benefits one can gain from owning a two-stage furnace, but what exactly are they, you ask?

This means that “your thermostat might think that your whole house has reached its desired temperature and shut the furnace off prematurely” (Source: AirCare.com).

This can result in an uneven temperature throughout the home, with sporadic hot and cold spots throughout- the ultimate heating nightmare.

Because two-stage furnaces don’t run on high power all the time, they’re also said to circulate hot air for longer. That means your house stays warmer for more consistent periods of time. This appears to be an advantage compared to the single-stage furnace, which turns on and off more often due to the high power.

Due to the fact that two-stage furnaces are supposed to circulate this air more efficiently, they are also supposed to be better at heating larger spaces than single-stage furnaces. This makes it an attractive consideration for middle-size and up homeowners.

Lastly, two-stage furnaces are supposed to be quieter than single-stage furnaces thanks to the low fan speed. Due to the fact that it operates on lower power 70-80% of the time, it’s a quieter furnace, making it a seemingly preferable option for workplaces or people who are sensitive to sound. This claim is true.

All in all, the two-stage furnace sounds like a pretty great deal then, right? You get to save money in the long term, thanks to the fact that your furnace isn’t using full power whenever it’s on. It’s also quieter, and it heats up more space in the process.

However, there has been recent discourse regarding the possibility that sellers of two-stage furnaces hype up the benefits beyond proven facts. Meanwhile, recent studies have found that some of these claims don’t actually hold up. Let’s dive into the controversy surrounding the alleged benefits of two-stage furnaces.

Does a Two-Stage Furnace Save Energy?

Their findings effectively debunk claims about their ability to save you money in the long run.

Not only that, but until the passing of a new law in 2019 that required more efficient motors to be used in two-stage furnaces, they cost more to operate than single-stage furnaces.

Therefore, unless your two-stage furnace was made after 2019, it’s likely no more energy-efficient than a single-stage furnace. Using it may also prove to be more expensive.

If you manage to find a two-stage furnace made after 2019, yes, it can save you money- but not in the way you might think.

According to some recent studies, whether or not your two-stage furnace saves you money depends significantly on the type of motor your furnace has.

A Wisconsin study found that two-stage furnaces saved a 40% decrease in the consumption of electricity in furnaces with BPM motors compared to furnaces using PSC motors (Source: ACEEE.org)

This means people who own these types of furnaces can get a financial benefit- a 40% decrease in electricity costs.

So if you’re in the market for a new two-stage furnace, make sure to confirm the type of motor with your contractor to make sure you’re getting the best deal possible.

So, What’s the Bottom Line?

If you have a larger home, value a quieter fan, and can get your hands on a two-stage furnace that was made after 2019 and has a BPM motor.

A two-stage furnace could very well be the choice for you if you have the extra money to spend in the first place and would like to make an investment.

However, many people agree that single-stage furnaces are plenty efficient at heating regular-sized homes as long as they’re installed properly by a quality contractor.

They come with the added benefit of a lower initial price point and their ability to adequately heat most homes.

Don’t know how to make sure your contractor is the right choice? If you’re interested in figuring out how to find a contractor that won’t try to get extra money out of you, check out this link.

It will lead you to a great YouTube video that explains what qualities you should try to avoid in a contractor and a strategy you can use to make sure you find the right one.

Two-stage furnaces come with a surprising number of disadvantages that one should be aware of before making their purchase.

Use this article as your guide to help you choose which furnace suits your needs best.