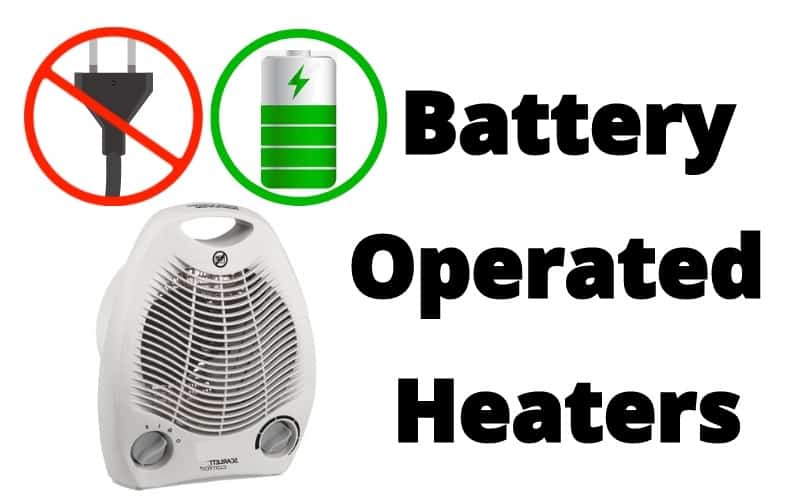 Imagine how incredibly convenient it would be to charge a portable heater and then take it with you anywhere you want!

Unfortunately, the only ‘true’ battery-operated heaters are small hand and body warmers that you can put in your gloves, pocket, and socks. There are also devices that have a battery but rely on fuel to produce the heat and heaters that can run on the car’s battery.

Are there heaters that don’t need electricity to operate and can a solar battery be used to keep a space heater running? Let’s dive deeper into the topic.

Is There Such a Thing as Battery Operated Heaters?

The truth is that battery-operated heaters can’t really run on batteries alone. A lot of them need some kind of fuel to actually be able to heat up a space.

So, while propane or kerosene are used for the heating part, the batteries help with the rest of the heater’s operation process.

There are also rechargeable battery-powered heaters that can be charged with a cord (like a cell phone). But such devices are not powerful enough to warm a whole room – you can only keep your feet or hands nice and toasty with these units.

On the market, you might find battery-powered gloves, blankets, and even jackets. Such devices usually have LIPO batteries and they are able to keep you relatively warm for up to a few hours.

Why can’t manufacturers use these LIPO batteries to create a space heater?

Such batteries are very expensive, and you would have to buy $20.000 worth of LIPO (lithium polymer) batteries to keep a small house warm. But that will last only for a few hours; after that, the batteries would have to be recharged.

Manufacturers might come up with a portable battery-operated space heater in the future as batteries are becoming more and more powerful, but for now – these are the only options that we have.

How do battery-operated heaters work?

The heaters that we have mentioned above are resistance heaters which means that they use electric current to generate heat.

The current passes through an electric wire and this electric flow creates heat.

Unfortunately, at the moment, battery-operated heaters are able to produce very little heat.

For comparison, an ordinary electrical heater can easily produce 40.000 BTU or more, while a car battery heater generates around 500 BTU.

To warm up a space, you are going to need about 40 BTU per square foot. So, a battery heater is going to be effective over only 10 square feet.

Read: How Much Electricity Space Heaters Use?

Is There a Heater that Will Work Without Electricity?

It is great to have a heating option that doesn’t rely on electricity. After all, you should be able to keep yourself warm in case there is a power outage.

Moreover, heaters that can work without electricity are, in the majority of cases, portable units that can be taken practically anywhere. So, you’ll be able to stay warm if you are camping, spending your day on a sports game, and so on.

These heaters work off your car’s battery. You can plug them into the outlet and enjoy additional warmth.

Due to the fact, that the units don’t have an actual battery inside them, these heaters are very light.

The people who tend to spend a lot of time outside might already know about these small, portable heaters. They run on small batteries and can be put inside your socks or gloves (you can also find special ‘warming’ jackets).

The more advanced devices can keep a part of your body warm for over 5 hours. Moreover, some can be recharged via a USB cable, so no need in replacing the batteries too often.

Hint: there are also hand warmers with special chemicals inside that can be ‘activated’ to keep you warm for a while.

Perhaps, these are the most common ‘battery operated’ heaters. However, in this case, the battery is used only to power the fan and ignition, while the actual heating relies on the fuel.

The majority of such combination heaters are quite powerful and capable of heating up not only small rooms but also large spaces.

Read: What You Need To Know About AUXILIARY HEAT?

Can You Run a Heater Off a Car Battery?

Technically, battery-operated car heaters are the biggest heaters that use batteries that you’ll be able to find on the market today.

The majority of these devices are plastic and incredibly light. The cost starts from around $30 and goes up to $100+.

A battery-operated car heater can be used to quickly warm up your car on a cold morning or to defrost the windscreen. Such devices can also be a great alternative for people who can’t really afford a car heating system at the moment.

So, yes, there are special heaters that you can run off a car battery. But…

Can You Run a Space Heater Off a Car Battery?

Using the car battery to warm up a space might make sense, if you find yourself in the middle of a power outage or if you have decided to go camping, for example.

In theory, you can run a space heater off a car battery. But only if you are able to convert the DC current to AC and then transform it to 120 V.

However, that might not be possible for quite a few reasons.

To keep the car battery healthy, you should never make it deliver more amps than its amp/hour rating divided by 10. So, if your car has a 45 amp/hour battery, you would have to keep the discharge rate below 4.5.

Do bear in mind that a lot of space heaters require at least 10 A.

To make the heater operate, you would also have to connect it to a transformer, the latter – to an inverter, and the inverter – to the car’s battery.

That is because car batteries can deliver only DC current and have a voltage of 12 V, while space heaters require 120 V and need AC current.

You might end up draining the battery and/or damaging the devices. Moreover, this whole manipulation is quite unsafe, especially, for someone who is not very good with electronics.

However, in an emergency situation when you have no other choice, a car battery might, in theory, be connected to a space heater and keep you warm for a little over 3 hours.

Is There a Solar Powered Heater?

You can run a space heater on solar panels. Even though the panel can’t directly provide power to the heater, you can still make it work by using a battery (to store the energy) and an inverter.

Solar panels might be a great option for people who like to spend their time outdoors and would like to sometimes take advantage of a space heater.

There are portable solar panels that you can take with you. The energy produced from the panels is stored in a solar battery that you can, later on, use to power the space heater.

What is a solar air heater?

You would have to mount the unit to a window, wall, or roof so that it is able to receive enough sunlight.

The devices use a fan to pull the cold air from the room. The air gets heated up next to the collector and is then pushed back into the room.

Solar air heaters are effective at warming the air in smaller rooms. By the way, such devices can reduce your heating costs by up to 70% and they can last for longer than a lot of ordinary space heaters (some have a lifespan of 20 years).

Read: What Is The Difference Between A Heat Pump And A Furnace?